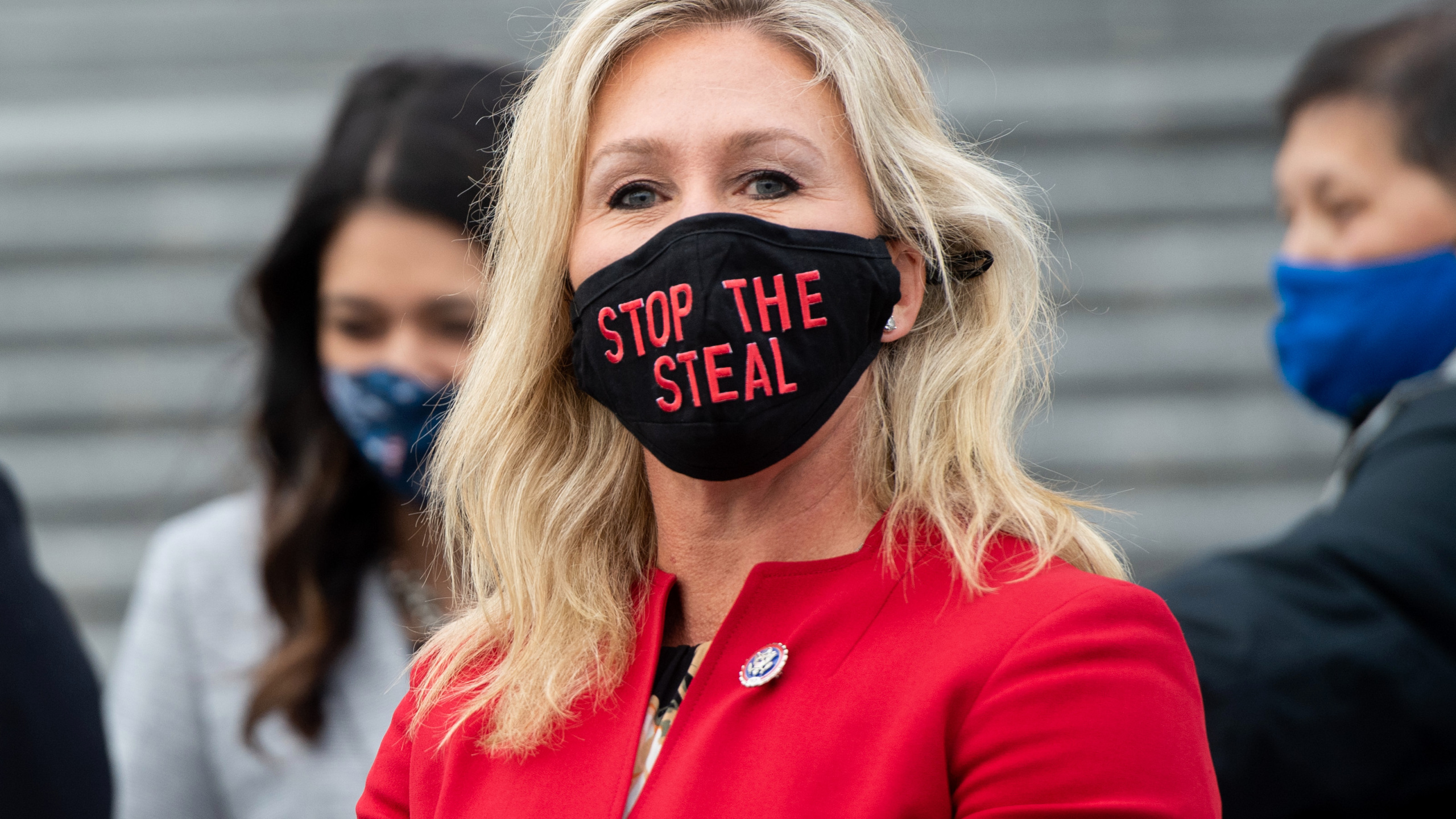 Marjorie Taylor Greene, the one-woman wrecking ball of the GOP (OK, she’s not the only one, but one of her is enough), has managed to wrangle a spot on the  Education Committee, even though she has seriously claimed that various school shootings were hoaxes. (Maybe she thinks the students were killed by Jewish space lasers?) Speaker Pelosi was FURIOUS with the Republicans for giving Greene that committee assignment.

“What could they be thinking? Or is thinking too generous of a word for what they might be doing?” Pelosi said Thursday of the GOP’s decision to seat her on that committee. “It’s absolutely appalling, and I think the focus has to be on the Republican leadership in the House of Representatives for the disregard they have for the deaths of those children.”

House Democrats are now forcing the Republicans to do something (or admit that they will do nothing) about their currently most unhinged member (and she has lots of competition for that title):

WASHINGTON — A group of House Democrats introduced a resolution in the House Monday that would remove Rep. Marjorie Taylor Greene, R-Ga., from her two committee assignments as a consequence for her inflammatory and false statements.

Deutch, not at all incidentally, represents the district that includes Parkland High School; Wasserman Schultz’s district is next door.

Deutch represents Parkland and said during the press conference that this is a “line-in-the-sand moment for the Republican Party” and “the question quite simply is whether they will draw the line when a member of the Republican caucus moves far beyond political rhetoric and into what is extremely dangerous misinformation deeply offensive, harassment and the refusal to acknowledge truth.”

Commentator Charlie Sykes agrees (article is behind a paywall, but Political Wire has some clips):

“Republicans are already rehearsing their excuses and rationalizations. But the reality is that the post-Trump/forever Trump GOP simply no longer has the antibodies to fight off the contagion of crazy.”

“A healthy political party actually cares about truth. It is concerned about its credibility and can distinguish a difference of opinion from the insane rantings of a deranged conspiracist. But the GOP is not a healthy party; over the last four years it has morphed into a cult, where believing lies and celebrating ‘fighting,’ have become rituals of admission.” [emphasis added]

Reread the bolded text above. It sums up the crisis facing the GOP, and by extension the country, in a nutshell. The GOP’s relationship to the truth has grown increasingly tenuous over the decades. Reagan had his fantasies about Iran-Contra, though he was at least honorable enough to admit (sort of) that he had been wrong. McCain refused to buy into the notion that Obama was a secret Muslim — but he also picked Sarah Palin for VP, a decision that accelerated the slide. And of course we have Trump and his 30,000+ lies. The list is endless and I’m trying to keep this at least a little shorter than a PhD thesis.

A half-century ago, the GOP, realizing it was never going to persuade the country to agree with its true agenda, faced an existential choice: Change the agenda, or change the perception. They chose the latter, and their disconnect with reality grew from there.

They knew what they were getting with Trump but thought they could control him, or work around him, or that he would somehow improve. They forgot the lesson the German political elite learned (too late) with Hitler: you can ride the tiger, but the tiger decides where it wants to go. And once you get on the tiger’s back, you die if you get off.

The tiger — Trump — has been caged, permanently, one hopes, but he is still prowling its cage and growling threats to claw and shred anyone who gets in his way. (Metaphors can stretch, but I suspect I’m reaching the breaking point here. Anyway…) Republican leaders had a chance to get the cage hauled away, but the lacked the courage to do it. Now they face a whole menagerie of chimeras they they created and let loose. (Break one metaphor into a bowl and beat until fluffy.)

Seriously, now: Marjorie Taylor Greene is the latest example of a phenomenon I’ve seen in many religious sects: They start out on the far edge of reality, and then fall over the edge. Each successive iteration is more and more outlandish and demands more and more loyalty to its fantasies. Greene is the current far out — but I guarantee you that if she is not stopped now, if her own party cannot admit what a mistake and disaster she is, she herself will be surpassed by even crazier lunatics looking to get power.

And right now, the Republican party is preparing to let that happen.