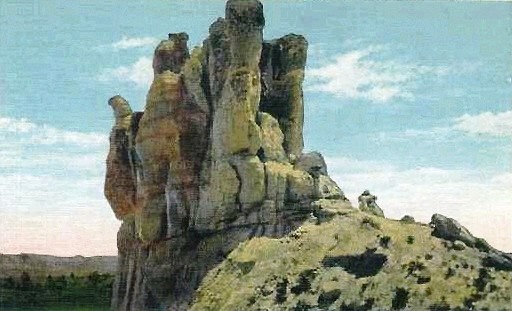 It’s not animal husbandry, but like Rachel Maddow’s new book chronicles, US crony capitalism in the Trump era can often devolve to fossil fuel kleptocracy. In today’s Arms for Dirt, the GOP demand to prosecute the Bidens distracts from the concurrent deals Rick Perry made for his cohorts. These potential crimes were aided by Rudy Giuliani attempting to destabilize Ukraine’s government. But everyone should relax, the exploration leases in Ukraine only last 50 years. Darn that foreign bid-rigging annoying the Ukrainians.

This is BIG legal news and has implications for Giuliani/Parnas et al https://t.co/HJEacEfmXt

This summer, the Ukrainian government awarded the rights to develop a huge complex of oil and gas fields in the country to an American company that is co-owned by a former campaign donor to then-Energy Secretary Rick Perry. The decision annoyed the heads of the state-owned Naftogaz conglomerate, which had competed and lost the bidding for the contract. Now, Naftogaz has filed a lawsuit seeking to overturn the deal, two sources familiar with the matter tell TIME, casting a spotlight on Perry’s role in Ukraine’s oil and gas industry.

The suit was filed on Friday afternoon in the District Administrative Court of Kyiv, the sources tell TIME, and has not been previously reported. In a draft of the complaint obtained by TIME on Monday, Naftogaz alleges that the government of Ukraine acted illegally and with bias in July when it granted the oil and gas fields to an American company that is co-owned by Michael Bleyzer, one of Perry’s longtime allies and financial backers.

The Department of Energy (DOE) denied that Perry advocated for the business interests of any specific individual or company during his tenure as Energy Secretary, which ended this month. Rather, a department spokesperson said, Perry advanced the general interests of the U.S. energy sector. “Throughout his tenure at DOE, Secretary Perry championed the American energy industry all over the world,” Shaylyn Hynes, a spokesperson for the Department, said in a statement on Sunday. “[T]hroughout his engagements with Ukrainian officials Secretary Perry consistently called for the modernization and reform of Kyiv’s business and energy sector in an effort to create an environment that will incentivize Western companies to do business in Ukraine.”

When Perry attended Zelensky's inaugural, he mentioned making changes to the Naftogaz board, pushing his buddy Bleyzer. Bleyzer's company then bid on the rights and ended up winning it even though the subsidiary of Naftogaz, UGV bid was millions higher. 🤔https://t.co/G6O7b49L4v

Since 2017, Perry has played the role of international salesman for the American energy industry, particularly as an enthusiastic hawker of liquified natural gas, which he famously dubbed “freedom gas.” But as one of the Trump administration’s so-called “three amigos” who have led the United States’ diplomatic efforts in Ukraine, Perry is now embroiled in the impeachment inquiry into the president. He refused to comply with House Democrats’ subpoenas for documents related to his meetings with the Ukraine president and has declined to testify before committee members leading the impeachment investigation. Reports of his donors’ receiving a lucrative drilling contract in Ukraine now only heightens the scrutiny on Perry.

The revelations that Perry engaged in what looks to be a classic example of political cronyism should be unsurprising to those familiar with Governor Goodhair’s tenure. Over his 12 years running Texas, he developed a reputation as a brazen purveyor of pay-to-play politics, shamelessly installing his biggest political donors in powerful positions of public trust.

"Parnas and Fruman 'wanted a sole-source contract or some guarantee they would have a contract to supply liquified natural gas to Ukraine through Naftogaz,” using the company’s infrastructure such as pipelines and storage tanks…https://t.co/jYbhh9bk0r

(495979)
(as of May 16, 2022 23:54 GMT -04:00 - More infoProduct prices and availability are accurate as of the date/time indicated and are subject to change. Any price and availability information displayed on [relevant Amazon Site(s), as applicable] at the time of purchase will apply to the purchase of this product.)