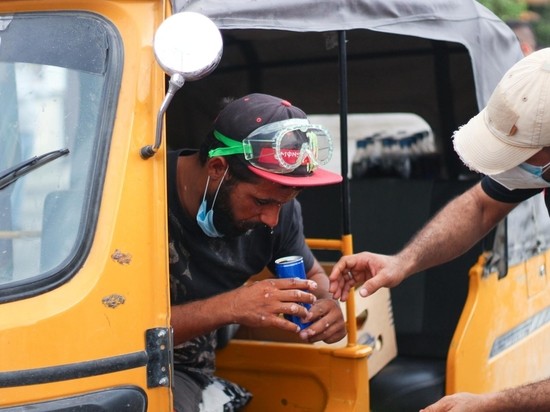 Protests in Iraq against the U.S. imposed central government in Baghdad are growing in intensity, tens of thousands of students and workers have filled Tahrir Square in recent days and Al Jazeera reports that more than 250 demonstrators have been killed and 11,000 wounded since the uprising began in early October.

(Al Jazeera has some great photos of the action at the link above, BTW)

Ambulances have pretty much stopped responding, as no one is safe from the tear gas, rubber bullets and sometimes live rounds being used against the demonstrators by the government.

But one group has dedicated themselves to ferrying supplies to, and broken bodies, from the violence, Baghdad’s three wheeled taxi drivers, maneuvering their tuk-tuks through the chaos.

“Karad Hussein is again on the front lines of the anti-government protests rocking Iraq, not to confront the authorities but as one of an army of tuk-tuk drivers and volunteers helping injured protesters.

“This is our duty. If I didn’t carry them, who would?” says Mr Hussein, 24, in Baghdad’s Tahrir Square. “Is there anyone else who can take them?”…

Swerving their three-wheeled vehicles through the explosions and smoke from stun grenades and tear gas fired by security forces, they ferry the casualties to ambulances outside the square.”…

“Every day we go to the protests to help the injured and the martyred,” he says. “From the first day, we were here.”

And we salute you, sir.

Not to be outdone, another brave citizen, Fatima Imad, came from her home outside the city to bring food to sustain the protesters. She has stayed in the city to bake bread for them and distributes bottles of a yeast/water solution to wash the tear gas from their eyes.

“We came to help our brothers and sisters here,” Ms Imad says. “We were not able to go out in our province, so we came to help them here. There is no difference among us.”

Go to The National  at the link above to read more about these courageous people.

I reverently hope that what they are going through in Iraq does not become necessary here in the States, but if it does, I hope we can exhibit the bravery they embody.