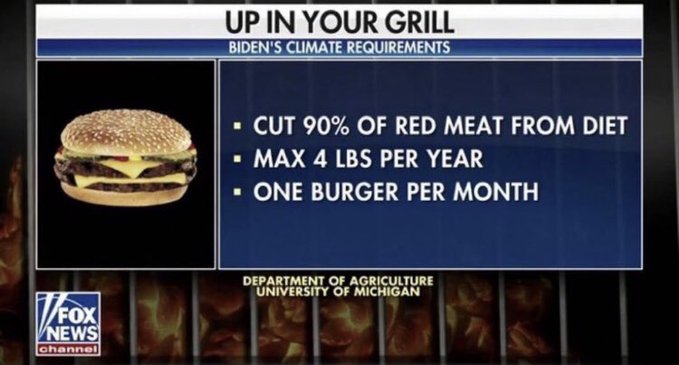 More GQP spotted owl-isms, riffing on culture war again because Moscow Mitch claimed last year that the Democrats’ nanny-state will regulate 'how many hamburgers you can eat'. Now GOP governors are beefing with a Biden policy that does not exist. More manufactured crisis, courtesy of RWNJ media.

Saw Greg Abbott comment on this fake “Biden plan” yesterday – it's a Daily Mail listicle based on a 2020 U of M paper unrelated to Biden. But colleagues point out today that Idaho's gov also jumped on, and Nikki Haley's group created a meme for her to RT pic.twitter.com/ksoYAeXHd5

Republican governors are taking a stand against a Biden policy that does not exist. pic.twitter.com/sl6YqorrHy

This stuff is completely imaginary. Biden has not proposed any limit on Americans’ meat consumption.

What happened: 1) The Daily Mail ran an article that dishonestly connected Biden’s climate plan with a not-at-all-about-Biden study. 2) Others on the right just ran with this. pic.twitter.com/VRB52TPmUj

Democrats want to take away all your meat based beers because honestly that sounds very gross https://t.co/YiwdykbXos

They warned me, if I voted for Biden, we’d all be drinking plant-based beer. https://t.co/mC4A0oNgXX

“Moderation doesn’t reduce the demand for [misleading] content, and demand for that content has grown during some periods of time when the platforms weren’t moderating or weren’t addressing some of the more egregious ways their tools were abused,” says Renée DiResta, technical research manager at the Stanford Internet Observatory.

The far-right media ecosystem has become so powerful in part because there’s been no downside to lying. https://t.co/31Eyx5m6cX

On the night after the November 3 election, hundreds of supporters of Donald Trump filled the parking lot of an election center in Arizona’s Maricopa County, where officials were still counting ballots. Although most networks had yet to call the state for Joe Biden, Fox News had declared him the projected winner shortly before midnight on election night. The Trump voters in Phoenix were furious. “Count the votes,” they chanted. “Fox News sucks!”

To Trump and his supporters, the network’s call in Arizona was a rare betrayal: In the previous four years Fox had become so enmeshed with the Trump administration that it functioned effectively as a mouthpiece for the White House. But Trump loyalists could easily confirm their belief that the election had been stolen from the president elsewhere, in more rabidly partisan outlets like Newsmax TV and One America News Network, which declared Fox a “Democrat Party hack” in the wake of its Arizona call. A whole web of right-wing influencers and outlets amplified conspiracies about ballots stuffed in suitcases and counterfeit mail-in votes.

At the Maricopa County rally, some protesters carried long guns. Others waved Sharpie pens, in reference to a rumor that had spread wildly online in the preceding hours and quickly became known as “Sharpiegate.” Sharpiegate was based on an unfounded claim that the votes of Trump supporters who’d been given Sharpies to fill out their ballots would be disqualified. The conspiracy theory appeared to originate with a conservative radio host in Chicago, who tweeted early on Election Day about felt-tip pens bleeding through ballots. Within a few hours, right-wing communities online were discussing claims that scanners couldn’t read Sharpie-marked ballots.

According to the Election Integrity Project, a partnership among several research institutions tracking misinformation throughout the election, the Sharpie conspiracy quickly became a popular explanation for why Biden was pulling ahead in swing states like Arizona. “Poll workers in Maricopa County AZ were handing out sharpie markers knowing full damn well that the machines register ONLY ink ballots. FRAUD IN ARIZONA,” read one tweet. A video featuring two women claiming that poll workers in Maricopa tried to force voters to use Sharpies went viral on Facebook, then spread quickly on YouTube, Twitter, Rumble, TikTok, Parler, and Reddit. Conservative influencers and media shared the conspiracy theory, as did Donald Trump’s son Eric and Arizona Representative Paul Gosar, who tweeted on November 4 that he’d asked the state attorney general to look into the claims.

As with other viral claims about election fraud in 2020, there was no evidence for Sharpiegate. The election was one of the most secure in history. Yet over two-thirds of Republicans believed that Biden’s win was illegitimate, according to a January poll.

(32706)
$348.00 (as of May 16, 2022 05:03 GMT -04:00 - More infoProduct prices and availability are accurate as of the date/time indicated and are subject to change. Any price and availability information displayed on [relevant Amazon Site(s), as applicable] at the time of purchase will apply to the purchase of this product.)