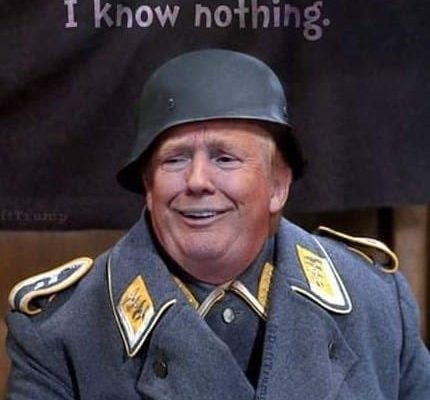 Donald Trump, his voice modulated to drown out the helicopter rotors and the shrieking shame goblins in his head, made a statement this morning on the White House lawn.

TRUMP on Gordon Sondland, who he described as “a really good man and great American” last month and who gave $1 million to his inaugural: “I don't know him well. He was with other candidates … not me. Came in late.” pic.twitter.com/oy9TUbwPpf

He wants nothing, he knows nothing.

Of course, right now he doesn’t know Sondland. Soon he’ll remember him well enough to declare him a lightweight and a loser and a low-IQ individual and an incompetent and all the usual nonsense.

In other words, he’s going to project like his political life depends on it.

Which, I suppose, it does.

Does Trump make you want to delete your brain? Of course he does! But don’t do it until you’ve read Dear F*cking Lunatic: 101 Obscenely Rude Letters to Donald Trump and its breathlessly awaited sequel Dear F*cking Moron: 101 More Letters to Donald Trump by Aldous J. Pennyfarthing. Reviewers have called these books “hysterically funny,” “cathartic,” and “laugh-out-loud” diversions from our temporary hell on Earth. Don’t delay. Click those links, yo!

(51328)
$17.62 (as of May 16, 2022 22:17 GMT -04:00 - More infoProduct prices and availability are accurate as of the date/time indicated and are subject to change. Any price and availability information displayed on [relevant Amazon Site(s), as applicable] at the time of purchase will apply to the purchase of this product.)