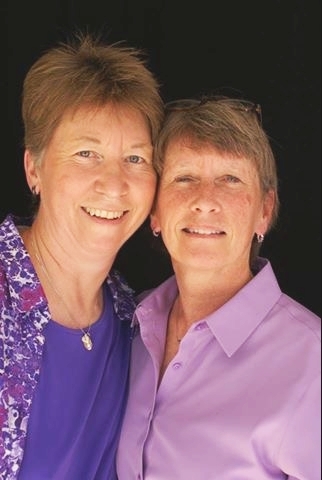 When the owner of Memories Pizza in Indiana recently told reporters that she would refuse to bake pies for wedding receptions if the couple were gay or lesbian, the story went viral. Lawrence Billy Jones III set up a GoFundMe page to “relieve the financial loss endured by the proprietors’ stand for faith” and he encouraged supporters of the homophobic pizza makers to “go 'like' and combat the leftist hatred expressed on Dana's [Facebook] page.”

The response was overwhelming raising, as of today, $842,442. Memories Pizza has closed up shop and the proprietors have been suitably rewarded for their bigotry.

In response to this, Lori Pimlott-Calvin and her wife Jill Calvin of Royal Oak (pictured here with Lori on the right, Jill on the left) created their own GoFundMe page called “Pizza lovers for marriage equality!”

Although their fundraiser is just getting started, they have already raised almost $1,400. All of the proceeds will go to support National Marriage Challenge and the legal team fighting for marriage equality in the U.S. Supreme Court this month and beyond.