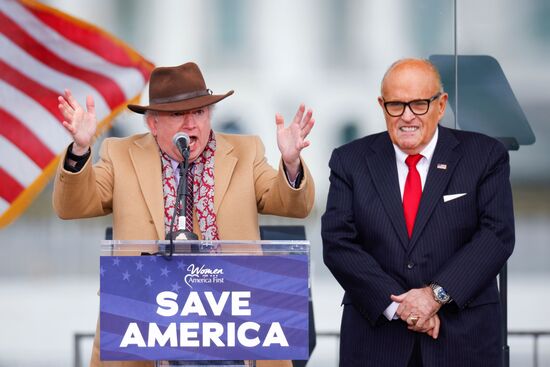 “Slammer Time” may be on the horizon. It won’t be about the DoJ looking backward or forward, but looking inward to do something historical to maintain democracy. Because a malign GOP is going to try it again. The blueprint was there for a while before it was committed to paper by its author, and it’s being followed by the GOP dominated state legislatures for “next time”.

Now John Eastman is saying his two memos choreographing the procedure to reverse the election were not his advice.

The Jan. 6 rally on the Ellipse and the ensuing attack on the Capitol by a pro-Trump mob would draw the world’s attention to the quest to physically block Congress from affirming Joe Biden’s victory. But the activities at the Willard that week add to an emerging picture of a less visible effort, mapped out in memos by a conservative pro-Trump legal scholar and pursued by a team of presidential advisers and lawyers seeking to pull off what they claim was a legal strategy to reinstate Trump for a second term.

They were led by Trump’s personal lawyer Rudolph W. Giuliani. Former chief White House strategist Stephen K. Bannon was an occasional presence as the effort’s senior political adviser. Former New York City police commissioner Bernard Kerik was there as an investigator. Also present was John Eastman, the scholar, who outlined scenarios for denying Biden the presidency in an Oval Office meeting on Jan. 4 with Trump and Vice President Mike Pence.

Eastman was not the first or the only person in Trump’s sphere to argue that Pence was empowered to block or delay certification of Biden’s victory. Trump’s former national security adviser Michael Flynn — and Trump himself — suggested as much on Dec. 23, retweeting a post about the possibility of invoking “the Pence card.”

Setting aside the kooky details here…big takeaway is that Trump is now publicly pressuring Pence to conspire in his bid to overturn the election pic.twitter.com/htggBkz6jY

“So here’s the scenario we propose.”

John Eastman has more recently distanced himself from the memos, telling the National Review on Friday that the options he outlined did not represent his advice. He said he wrote the memos at the request of “somebody in the legal team” whose name he could not recall.

John Eastman, in National Review Interview, Struggles Mightily but Unsuccessfully to Distance Himself from His Own Memo Suggesting How VP Pence Could Steal the Election for Trump, Now Repudiating Its Major Points https://t.co/JA48ZXosDD

In other words, a plain reading of both versions of the memo would lead the reader to conclude that Pence had the power to take any of the options outlined in them.

When I pointed out that both memos said it’s a “fact” that Pence is the “ultimate arbiter” and “we should take all our actions with that in mind,” Eastman at first incorrectly claimed he’d only written that in the two-page “preliminary” memo.

“No, that’s the preliminary memo,” Eastman replied. “I don’t think that’s the strongest legal argument or scenario. So that was just the first piece that I’d been asked to look at and put together how that would work if that condition was true. And it was that condition that I specifically told them I thought was the weaker argument, which is why I’m going to give you a more complete assessment of all the various scenarios.”

Readers can read the final memo for themselves, but that seems like a very odd interpretation of a memo that concludes: “The fact is that the Constitution assigns this power to the Vice President as the ultimate arbiter. We should take all of our actions with that in mind.”

The Eastman memo makes the infamous “Torture Memo” seem like “a paragon of legal reasoning.”

So writes CASBS fellow Scott Cummings @Slate. He exposes many Eastman claims that wreak havoc on the rule of law & call for @ABAesq sanction.

There are four fundamental problems with the memo from the standpoint of a lawyer’s professional responsibility to follow the rules of ethical conduct set forth by the state bar:

Eastman stayed at the Willard from Jan. 3 until after breakfast on Jan. 8, according to records showing that the hotel charged $1,407 for his lodging and meals during that time.

His arrival at the Willard came on the same day that Trump convened an Oval Office meeting to discuss replacing then-acting attorney general Jeffrey Rosen with Jeffrey B. Clark, a Justice Department official friendly with Eastman who proposed that the department encourage investigation of Trump’s election fraud claims in Georgia and other states. The three-hour meeting with Trump ended after Rosen, other department officials and White House counsel Pat Cipollone threatened to resign if Clark were appointed.

Clark has been subpoenaed by the House panel investigating Jan. 6 and is required to appear for questioning at the end of this week.

Representative Alexandria Ocasio-Cortez has called for any member involved in the planning of the January 6 riot to be expelled.

“Expulsion has to be on the table. It is one of the most severe consequences, if not the most serious consequence that Congress can engage in,” Rep. Jones say on members of Congress’ potential involvement in Jan. 6.https://t.co/ymJUaZdYjY

ICYMI: “Coups are not just tanks rolling in the streets. It's an illegal attempt to overturn the will of the people to retain political power. And if the organizers of the failed coup are not punished, what's to stop them from attempting another…?” https://t.co/d3adC82iLX

If Dr R's readers have not yet caught this new expose, it's well worth a read.https://t.co/LuQ0u89xF5

Social media users re-upped the tweet in light of the Rolling Stone article published Sunday in which two pro-Trump rally organizers said they met with Gosar and other GOP lawmakers in the weeks leading up to the Capitol attack.

The two organizers, speaking to the magazine under the condition of anonymity, said Gosar specifically offered them the possibility of receiving a “blanket pardon” from former President Donald Trump in an “unrelated ongoing investigation to encourage them to plan the protests.”

“Our impression was that it was a done deal,” one organizer told Rolling Stone, “that he'd spoken to the president about it in the Oval…in a meeting about pardons and that our names came up. They were working on submitting the paperwork and getting members of the House Freedom Caucus to sign on as a show of support.”

Why would you offer “blanket pardons” in advance for a tourist visit to the Capitol?

In response to narrowly spread demand, here are my Rules of Twitter. Note that each was learned by violating it repeatedly over the years, so don't bother going back in my feed to find contradictions… trust me, I know. pic.twitter.com/QtzhBkx9LP

(43213)
$0.00 (as of May 20, 2022 15:41 GMT -04:00 - More infoProduct prices and availability are accurate as of the date/time indicated and are subject to change. Any price and availability information displayed on [relevant Amazon Site(s), as applicable] at the time of purchase will apply to the purchase of this product.)