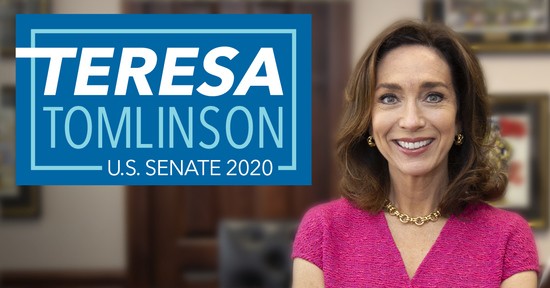 Georgia’s next United States senator isn’t going to be taking an easy job.

Once renowned as the world’s greatest deliberative body, these days the Senate is more of a legislative graveyard in the hands of the majority party.

Our next senator will need hands-on experience dealing with dysfunctional systems and making them work for the people in order to address the urgent issues facing our country.

That’s what I’ve been looking for in a Senate candidate to lead our Georgia Democratic Party to November’s elections.

Today, I am proud to announce that candidate is Teresa Tomlinson.

Teresa is unafraid of bucking the conventional wisdom when our government isn’t serving people like it’s supposed to. She’s for ending the Senate filibuster so we can make meaningful reforms to gun safety, healthcare, immigration, and climate policy.

As the two-term Mayor of Columbus, Georgia, she led the city to be named one of the 25 Best Run Cities in America. Teresa’s initiatives as mayor led to environmental cleanups, criminal justice reform, fiscal health, and a future-forward approach to transportation and infrastructure.

Teresa has the vision, experience, and a whole lot of Georgia gumption to win this race and put the Senate to work for us. Join me in supporting her today with your most generous contribution, and let’s win this thing!

(51660)
$17.62 (as of May 21, 2022 22:07 GMT -04:00 - More infoProduct prices and availability are accurate as of the date/time indicated and are subject to change. Any price and availability information displayed on [relevant Amazon Site(s), as applicable] at the time of purchase will apply to the purchase of this product.)