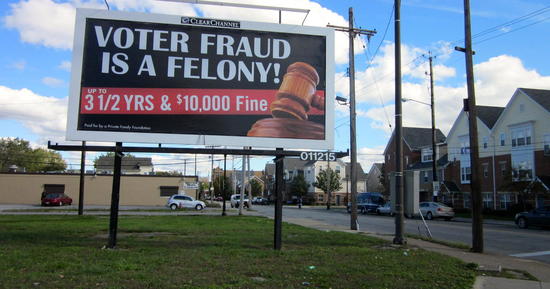 The GOP has, in multiple states, enacted severe penalties for the completely non-existent crime of in-person voting fraud. This is mostly to scare people in lower income areas into thinking that voting could be a crime—and make them think that perhaps it’s best not to risk casting a ballot.

The true crime, however, is voter suppression—which the GOP has given up any pretense of trying to hide.

This is nowhere as blatant as in Georgia, where the candidate for governor, Brian Kemp, is also in charge of overseeing his own effing election. Optics be damned, he has done everything in his power to suppress literally hundreds of thousands of Democratic voters of color.

Civil rights groups have sued Kemp after 53,000 people seeking to register to vote – nearly 70% of them black – had their registrations put on hold because the information they submitted was not an exact match with state records, with discrepancies as small as a misplaced hyphen causing them to be disqualified.

Another lawsuit was filed over reports that Gwinnett County, the most diverse county in the state, had rejected nearly 10% of absentee ballots sent in by mail, far more than other parts of the state.

In fact, Kemp purged 300,000 legitimate voters in just the time he’s been a candidate. Kemp was supposed to send notices to purged voters by law, but he didn’t. (If you are a Georgia voter, a journalist created a website that can tell you if you have been purged. )

Channel 2 investigative reporter Aaron Diamant has learned that leaders of the Democratic Party of Georgia contacted officials in Kemp's office, claiming the party had evidence that as many as 4,700 DeKalb County voters never received the absentee-by-mail ballots they requested for November's election.

DeKalb County is the second-most-affluent county with an African-American majority in the United States (behind a suburb of Washington D.C.). The GA Secretary of State’s office has not ordered an investigation.

All of these incidents are targeting black voters. It’s sick, repressive, and downright un-American.  Democrats, if they gain control in statehouses and on the national level, need to quit viewing these efforts as “shenanigans” that draw milquetoast condemnations, and start dealing with them as what the hell they are: a direct attack on our democracy. The oath of office includes the phrase “support and defend the Constitution of the United States against all enemies, foreign and domestic.”  An American citizen’s right to vote is the entire foundation on which our government is based, and people who seek to strip it away for partisan gain are enemies of the Constitution.

Yet in Florida, Rick Scott signed a GOP law that implemented thousands of dollars in fines for each voter registration card that isn’t turned in within 48 hours. As a result, third-party voter registration groups such as the League of Women Voters, unions and the NAACP had to significantly curb their registration activity because it was near impossible to guarantee a two-day turnover when you register thousands of new voters at a time. That same law also banned Sunday voting, permitted vote caging, and wouldn’t allow address updates at the polls.

The GOP has no bones about passing ridiculous voter suppression laws when they are in charge—and Democrats need to pass our own laws to make sure that voting rights are protected when we get in charge.

If you can fine a teacher 1000 dollars for turning in her students’ registration late, then Democrats can damn sure justify fining election officials for losing absentee ballots.

If you can pass law after law combating the non-existent threat of voter fraud, then Democrats can pass laws to penalize those who throw legitimate voters off voting rolls using corrupt systems like Kansas GOP candidate Kris Kobach’s Crosscheck. (A statistical analysis from Harvard and Microsoft found that it was wrong 99 percent of the time, yet that is the model Georgia and other GOP states use because it keeps blacks and Hispanics off of the rolls.)

How about this?  If you are a legitimate voter (which is easy to prove), and your state denies you the right to vote, just stop paying taxes! After all, that is taxation without representation.

Point is, there has to be a penalty if you deny an American citizen who wants to vote their right to vote. There isn’t any penalty right now, which is why voter suppression is so rampant. Blue states need to take the lead on this, and they need to act swiftly, if and when they regain power in red states.

And the next time Dems are in power on the federal level, maybe try not to squander your opportunities to protect us like you did last time?

Want to help Get Out The Vote for Democrats? Click here to enter your zip code and plug into a local event near you.

You can also help elect Democratic governors with your $3 donation.