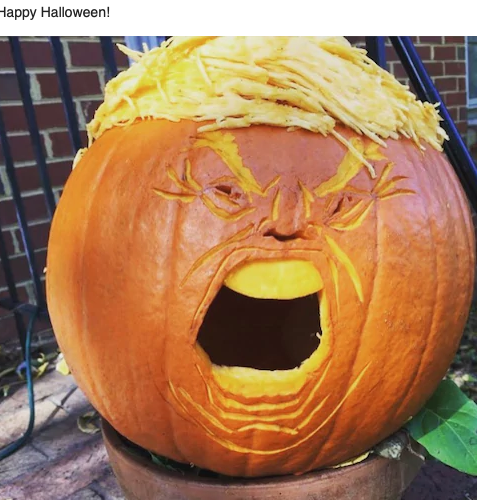 Good. I have questions. https://t.co/Ty8QMQzAp4

His claim we must wait until 2020 election has 2 serious flaws:

a)that's the very election he was trying to use foreign influence to win–he got caught 1x, but may be more

b)would mean a 2d term President can do whatever he wants b/c no election. No impeach/investig/indictment

Following on the GOP attempts to trivialize a constitutional responsibility by claiming that “Trump wasn’t serious”, we have learned more about the national security threat.

The whistleblower understood that there is a complete transcript and that Trump’s utterances were damning. “Crazy and Frightening” — hence the blocking of Ambassador Sondland’s testimony today.

Trump’s “Arms for Dirt” will now jeopardize European and NATO.

"The official, who listened to the entirety of the phone call, was visibly shaken by what had transpired," the whistleblower writes.

The memo states the official "described the call as 'crazy,' 'frightening,' and completely lacking in substance related to national security." https://t.co/skWNNXBAYO

ABC News has learned that the two-page memo, written by the whistleblower a day after Trump’s call, suggests that at least one aide to the president feared that Trump’s own words in the call were damning. According to a rough transcript of the call released by the White House, Trump asked Ukraine’s president Volodymyr Zelenskiy to launch an investigation into a political opponent, Democratic presidential candidate Joe Biden, and his son.

The notes were based on a brief conversation between the whistleblower and the White House official and described “highlights” from the president’s call. The document was later provided to the intelligence community’s inspector general, who reviewed the whistleblower’s complaint. The IG has determined the complaint “appeared credible” and of “urgent concern.”

“The official, who listened to the entirety of the phone call, was visibly shaken by what had transpired and seemed keen to inform a trusted colleague within the U.S. national security apparatus about the call,” the whistleblower writes in the memo.

The memo states the official “described the call as “crazy,” “frightening,” and completely lacking in substance related to national security.”

After the call, the whistleblower says “I … returned to my office, and wrote up my best recollection of what I had heard.” The person notes that they did not review the call transcript or written notes, “but the official informed me they exist.”

Breaking News: President Trump’s Ukraine call was “crazy” and “frightening,” a White House official said the next day, according to the CIA whistle-blower.https://t.co/0OYoUBoQci

Circling back to the “brainwashing” process, just watch Marco Rubio’s interview w the press a few days ago when he said Trump was joking. He looked strained, not himself, out of integrity, & in short wrestling w something like Stockholm syndrome.

What we see in Matt Gaetz is a congressman ignorant of what a Kangaroo court is, and who Captain Kangaroo was. @mattgaetz – only the best serve @realDonaldTrump https://t.co/yxvL0WiRt4

Ambassador Sondland participated in conversations and texts about whether a White House meeting and military aid were conditioned on Ukraine’s willingness to help Trump politically.

The “irregularities” are complaints about the impeachment process that Trump uses as an excuse to stonewall.

But they are not *legal* reasons. Trump asserts that he can ignore his legal obligations because he doesn’t like what Congress is doing.

That’s not how America works. https://t.co/u5dXO3WXrs

Trump Administration: The reason why a sitting President can't be indicted is because the Constitution expressly creates an alternative, political process for presidential misconduct.

Also Trump Administration: That alternative process is too political and entirely illegitimate.

NEW: The Senate Intelligence Committee has released Vol 2 of its report on 2016 election interference… this is on Russia's use of social media https://t.co/WV2OEFRmG0