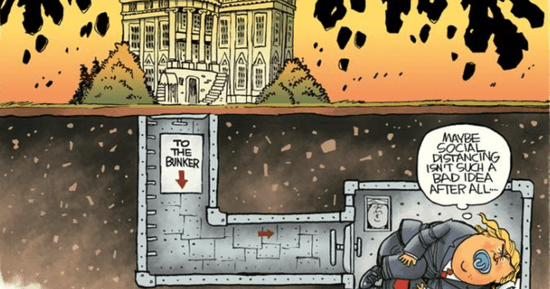 Trump still pimps the Big Lie, because only Mr. Bigly Orange could be hiding in a hitherto-unaccounted-for room in the White House. After all, isn’t Trump a National Treasure, and might he really be somewhere still in the White House, pursuing that Matrix-greenscreen version of Biden. Because Neo-liberalism is about marginalization, not culture wars.

Images, video footage, eye-witness accounts and expert analysis show that President Joe Biden gave an in-person interview and did not use a green screen. https://t.co/yvdk0NRD8Y

This doesn’t seem that surprising or unusual, and certainly not unique to Philly. Eg, https://t.co/kY3aMzdvdl

Is this like in National Treasure, where you need colored lenses to read the otherwise hidden message in the text? https://t.co/tUCqRJENUb

Broke: museum removes trump statue because it gets punched

Woke: museum charges 5$ a person to punch a wax statue of trump

Because it makes sense to see QAnon as a PR stunt by an art dealer.

The mysterious individual behind a new and rapidly growing online disinformation network targeting followers of QAnon, the far-right cult, can be revealed as a Berlin-based artist with a history of social media manipulation, a prominent anti-racism group claims.

Since Donald Trump left the White House, QAnon’s vast online community has been in a state of flux as it comes to terms with the reality that its conspiracy theories – such as the former US president being destined to defeat a cabal of Satan-worshipping paedophiles – amount to nothing..

That may explain why significant numbers have turned to a new far-right network, found mostly on the Telegram messaging app, that is growing quickly in the UK and globally and has amassed more than one million subscribers so far this year.

(51283)
$17.62 (as of May 15, 2022 22:00 GMT -04:00 - More infoProduct prices and availability are accurate as of the date/time indicated and are subject to change. Any price and availability information displayed on [relevant Amazon Site(s), as applicable] at the time of purchase will apply to the purchase of this product.)