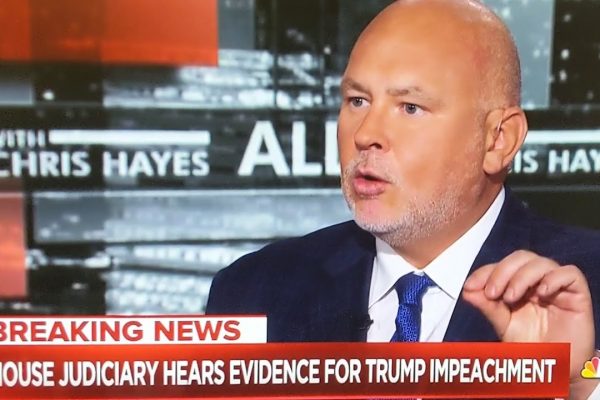 Former GOP Strategist Steve Schmidt appeared on All In with Chris Hayes recently. He did not mince his words as he excoriated Ted Cruz and Trump apologists equating them just short of traitors.

“You see these Republican members up there today,” Former GOP Strategist Steve Schmidt said. “They are not disputing facts. It is incoherence in the extreme.”

Schmidt then addressed Ted Cruz who we covered yesterday for his appearance on Meet the Press with Chuck Todd. He was doing the work of Russian propagandist.

“And yet again on Sunday,” Schmidt continued. “We saw — and nobody should doubt whether they like him or not — Ted Cruz’s I.Q. He is not a dumb guy. … Which makes what he is doing all the worse from some of the freak show members like Louie Gohmert that we see. When you have someone like Ted Cruz, willfully, deliberately, premeditatedly, making a decision, ‘I will deliver the Russian Federation Intelligence Services talking points to aid Donald Trump and I would make that primary and subordinate my oath of office, my duty to the country, and fidelity to the great sacrifices from John Lewis, from Martin Luther King, to the men who stormed the beaches in Normandy, to 1st Minnesota filled with immigrants that saved the Union in the critical moments of the battle of Gettysburg.’ It is that breaking of faith with our history that connects us as a nation of flawed — each generation making a more perfect union.”

But the GOP Strategist was not done. He continued to lay it on.

“In the recision of our Democratic norms in this tragic hour,” Schmidt said. “It is just astonishing to watch playout. And the great threat, maybe, to American Democracy wasn’t fascism. It wasn’t communism in the end. It’s indifference. And it is the indifference of our highest elected officials in the land. And how appalling is that?”

This needs to be packaged neatly for our Republican family, relatives, friends, and acquaintances. After all, Schmidt might remind them of what they claimed they stand for from one who stood with them.

(51626)
$17.62 (as of May 20, 2022 23:55 GMT -04:00 - More infoProduct prices and availability are accurate as of the date/time indicated and are subject to change. Any price and availability information displayed on [relevant Amazon Site(s), as applicable] at the time of purchase will apply to the purchase of this product.)