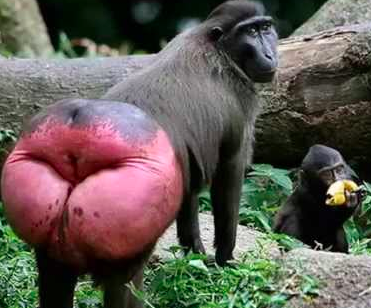 There’s no defending Donald Trump. The only possible strategy is to deflect, deflect, and deflect some more.

Last night, Trump suggested the late Rep. John Dingell may be in hell. That’s bullshit, of course. I know, because I’ve been in hell since November 2016, and I don’t see John Dingell anywhere.

In case you missed it, here was Trump last night, looking redder than a baboon’s ass during mating season:

Trump laments that Debbie Dingell voted to impeach him despite the fact that he allowed the normal state funeral to proceed for her late husband, former Rep. John Dingell. Trump then suggests John Dingell is in hell — to audible groans. pic.twitter.com/wsYfddNIA9

Some have called for Trump to apologize for his comment. He hasn’t, of course, and he never will. Instead, he sent out his flying monkeys to double down on his sickening “burn.”

First up was Stephanie Grisham, who is apparently paid a full-time government salary to spout gibberish once every harvest moon.

STEPHANOPOULOS: Why did Trump joke about John Dingell being in hell at his rally last night?

STEPHANIE GRISHAM: “As we all know, the president is a counter-puncher. It was a very supportive and wild crowd. He was just riffing.” pic.twitter.com/Wv8BuP8t3u

GEORGE STEPHANOPOULOS: Why do you think the president said that overnight?

GRISHAM: You would have to talk to the president about that. He was at a political rally. He has been under attack and under impeachment attack for the last few months and just under attack politically for the last two and a half years. I think that as we all know, the president is a counter-puncher. It was a very, very supportive and wild crowd, and he was just riffing on some of the things that had been happening the past few days.

“He’s a counter-puncher” is simultaneously the worst and most tired excuse of all time. I’d like parents to try that one out at their daycare when their kid starts throwing flaming Molotov diapers at other kids. “Oh, he’s just a counter-puncher. That’s our Billy! So, so impish and adorable.”

Next up was White House spokesperson Hogan Gidley, who is also getting paid for some reason (second tweet):

WH spox Hogan Gidley responds to Trump joking about John Dingell being in hell by trying to make *Trump* the victim: “No matter what the president says…people are going to parse it apart, try & tear it apart & focus on the most negative aspects of it…he's been under assault” pic.twitter.com/gV3uEllRkS

GIDLEY: It’s just always an interesting situation here in D.C. No matter what the president says, people are going to parse it apart, try and tear it apart, and focus on the most negative aspects of it. But let’s be clear, so many of these Democrats, and the hypocrisy in this town is staggering. When they come over here and try and have conversations with the president, work with the president, come to successful conclusions on bills, on executive orders. And then they turn around and slap him in the face. It’s just a tough thing. He’s been under assault ever since he took the oath of office, even before — for the last several years. And so, look, it’s understandable that someone’s frustrated by the fact that you have 93 percent negative news coverage against you, even though you’ve had so many successes on behalf of the American people.

Oh, my God. I think I’m going to cry. People are criticizing the president of the United States! That’s never, ever happened before! It’s not fair!

I mean, it’s not like Republicans ever attacked Barack Obama or Hillary Clinton or any other high-profile Democrats. This is unprecedented!

How could Donald Trump not turn vicious? HE’S BEEN SCRUTINIZED, I TELLS YA!

Why are you criticizing Donald Trump for attacking a dead man and his widow, you assholes?! He’s the president! Calumny!

(43136)
$0.00 (as of May 20, 2022 01:50 GMT -04:00 - More infoProduct prices and availability are accurate as of the date/time indicated and are subject to change. Any price and availability information displayed on [relevant Amazon Site(s), as applicable] at the time of purchase will apply to the purchase of this product.)