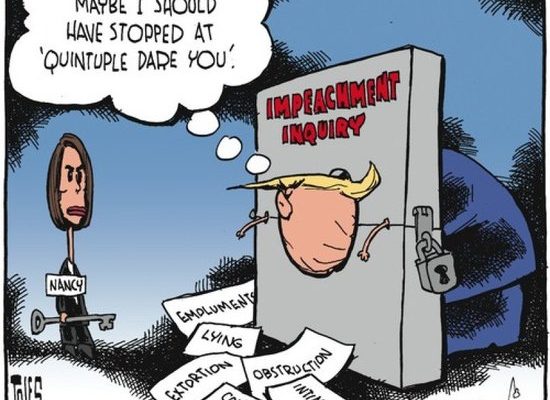 If it was good enough for the Mueller report, maybe it applies to all of PABOTUS*’s crimes. This continues the speculation fostered by Senators like Lindsey Graham, that Trump is too incompetent to be impeached. It is more amusing to think that 45* is annoyed that his wishes were not accommodated.

President Trump wanted Attorney General William P. Barr to hold a news conference declaring the commander in chief had broken no laws during a phone call in which he pressed his Ukrainian counterpart to investigate a political rival, though Barr ultimately declined to do so, people familiar with the matter said.

The request from Trump traveled from the president, to other White House officials, and eventually to the Justice Department. The president has mentioned Barr’s declination to associates in recent weeks, saying he wished Barr would have held the news conference, Trump advisers say.

Detractors have criticized the attorney general as eroding the Justice Department’s independence, though Trump has generally been pleased. Most recently, allies say he has been heartened as Barr has sought to investigate those involved in the Russia case, tapping U.S. Attorney John Durham to lead an inquiry into the origins of the Mueller investigation and whether the U.S. government’s “intelligence collection activities” related to the Trump campaign were “lawful and appropriate.”

On Ukraine, though, the White House and Justice Department have been somewhat out of sync.

Some time after The Washington Post began reporting on the nature of the whistleblower’s complaint about Trump’s phone call, the Justice Department pushed to release the rough transcript. Leaders there believed — perhaps misguidedly — that doing so could quell the budding controversy, because in his conversation with Zelensky, Trump did not explicitly push for a quid pro quo tying U.S. aid for Ukraine to the politically beneficial investigations he sought. The White House was initially resistant.

Trump reportedly wanted Bill Barr to hold a press conference declaring that Trump did nothing wrong on his call with the Ukrainian presidentÃ¢Â€Â”just like he did when the Mueller report came out. https://t.co/VpSIAlx6wo

(43291)
$0.00 (as of May 22, 2022 00:21 GMT -04:00 - More infoProduct prices and availability are accurate as of the date/time indicated and are subject to change. Any price and availability information displayed on [relevant Amazon Site(s), as applicable] at the time of purchase will apply to the purchase of this product.)