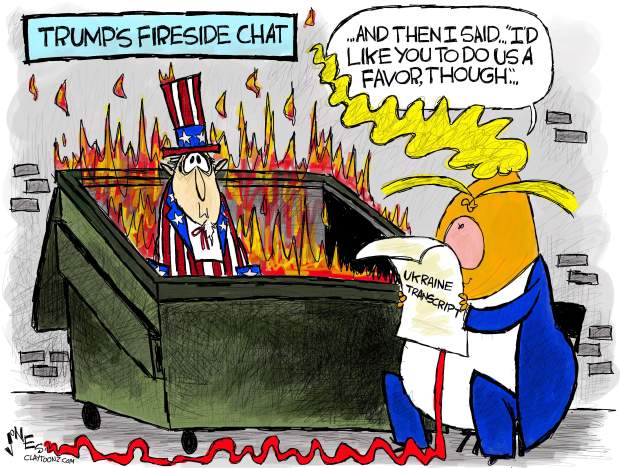 Whether it was the weakened RNC Ukraine plank that coincided with the 2016 infusion of Russian money in the GOP or the current shake-down of Ukraine by withholding US military aid, the crime spree continues.

Trump has made an intense effort to convince people that the highly accurate whistleblower was highly inaccurate, making this claim at least 32 times over five weeks. Now he’s trying to use his fictional reality as the basis for revealing the whistleblower’s identity. pic.twitter.com/ce9jWPOb7r

Note: POTUS is employing the same kind of "corrupt origins" attack as he did with Mueller. Trump fuels suspicions about the whistleblower's motivations just as he did by using the Steele Dossier. The aim is to render every piece of damning evidence somehow illegitimate. https://t.co/HvcaMJy7Tc

No different than the NY Times doxxing the whistleblower, GOP/Trump intimidating of future whistleblowers distracts from the reality of how even with the fragments of testimony available, the shakedown has been accurately described.

This was the fastest any claim ended up on the Bottomless Pinocchio List. Trump said it 29 times within a couple of weeks, and he's probably said it another 29 times since our last update. Saying it over and over doesn't make it true. https://t.co/FC7KHDh6a9

Whistleblower is inaccurate: Trump repeated some version of this claim 29 times

The whistleblower report is correct on key details about the call between Trump and Ukrainian President Volodymyr Zelensky, according to the rough transcript released by the White House. Other details contained in the whistleblower complaint have been largely confirmed, according to a line-by-line examination by The Fact Checker. Read more

And think about the amounts of money.
No gangster in history has ever had 400 million dollars of leverage.
The magnitude is off the charts on this extortion racket.

Trump Gets Note From Podiatrist Exempting Him from Impeachment

(85956)
(as of May 17, 2022 18:15 GMT -04:00 - More infoProduct prices and availability are accurate as of the date/time indicated and are subject to change. Any price and availability information displayed on [relevant Amazon Site(s), as applicable] at the time of purchase will apply to the purchase of this product.)