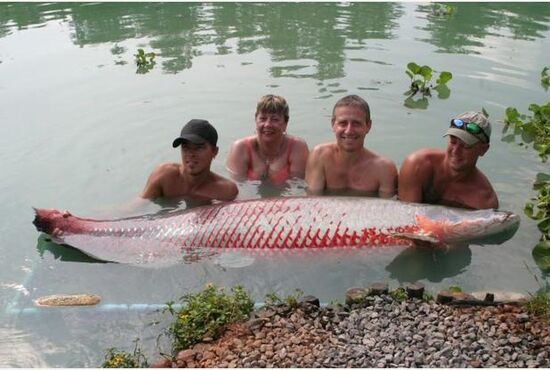 Native to the Amazon river basin, the Arapaima is likely the earth's largest freshwater predatory fish at 10 feet and 400 pounds, where they have lived for over five million years.

In south-central Florida, far from Amazonia, one individual washed up dead on the banks of the Caloosahatchee River on Florida's west coast (the river made international news during the horrific red tide events when the poisoned waters of Lake Okeechobee were dumped into the Caloosahatchee along with the Saint John’s River, which in turn drained into marine and freshwater systems in Florida’s Gulf and Atlantic coasts). This news is just the latest of many repeated blows to earth’s biodiversity.

When rivers overflow, the Arapaima spread out so far that water steeped in decaying vegetation may not have any oxygen. This is not a hindrance to this fish because they can breathe air. The Smithsonian notes that it can do that because they have gills so small “that it takes in the air using a modified swim bladder that opens into the fish's mouth and acts as a lung. It can survive as long as 24 hours outside the water”.

A Florida study 10 years ago stated Florida’s waters were too cold for the species to survive. Climate change has allowed it to thrive; unfortunately, the fish can move northwards due to our warming world.

That is one tough fish. Anglers enjoy the strength and size of the fish.

From Field and Stream magazine:

Arapaima made fishing headlines several years ago when American fly anglers traveled to South America’s Amazon Basin to catch them. Those trips were named after the greatest sporting event in the 20th century, the 1974 George Foreman vs. Muhammad Ali, the Rumble in the Jungle. It’s one thing for fishermen to travel abroad to target these hard-fighting game fish. But the invasive arrival of arapaima to U.S. waters poses a lot of problems, and could be devastating to the watershed and the ecosystem.

Arapaima inhale food through their vacuum-like mouths, and their prey isn’t just fish. They feast on birds, lizards, and small mammals. They’re capable of jumping out of the water to snatch a meal. (And as their enormous weight suggests, arapaima fish eat a lot.) These prehistoric predators have a swim bladder that opens into their mouths like a lung which means they can survive in warm water. They’re like a colossal walking catfish, meaning that they can survive out of the water, living on hot, dry land for up to a day. But the biggest issue is that they can lay hundreds of thousands of eggs over their 20-year lifespan. A growing population could threaten native and migratory species big time.

John Cassani, an ecologist for the Calusa Waterkeeper, told a Florida news station that the dead, washed-up fish might not be the only invasive arapaima in Florida. “Obviously a big aggressive predatory fish is popular amongst anglers,” he said. “But the risk to the ecosystem far outweighs the recreational value of the species.”

The fish is said to be delicious. Hopefully, that fact might keep the fish population somewhat in check.

The meat of the fish—also known as paiche or pirarucu—is boneless, odorless, and mild, making it a prized catch for both local fishermen and chefs abroad.  You may have seen Masaharu Morimoto and Justin Bogle turn it into tiradito and banh mi on Iron Chef America a couple years back, or read about its arrival at Sushi Samba and Whole Foods.

(22195)
$179.00 (as of May 17, 2022 00:56 GMT -04:00 - More infoProduct prices and availability are accurate as of the date/time indicated and are subject to change. Any price and availability information displayed on [relevant Amazon Site(s), as applicable] at the time of purchase will apply to the purchase of this product.)