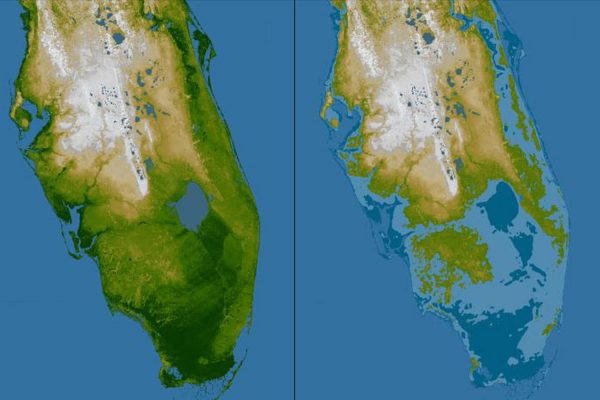 The Miami Herald reports that Monroe County Florida is considering abandoning low lying roads in the Florida Keys that will be extremely expensive to continually raise above the encroaching sea.

While this might seem like a mostly local problem, it really brings home the cost of global warming–something that many dismiss as a problem for the distant future that will mostly affect other people. It comes more into focus if it costs Florida taxpayers hundreds of millions of dollars, a cost that will rise exponentially along with the sea level.

The county has 314 miles of road to care for — or choose to abandon. Half of them are susceptible to sea rise in the next 20 years. The cost to keep them dry has county government officials openly questioning whether the math is worth it.

“Are we really going to spend $128 million to elevate three miles of road where 30 people live? It’s not up to me, but I don’t think so,” said Rhonda Haag, Monroe County’s head of resilience.

In cases where the costs of flood-proofing the roads overcome the benefit of keeping communities dry, Monroe officials said, the answer is buying out homes.

It hardly needs to be mentioned that Florida is the largest swing state and much of the population lives on low lying coastal land.

The Republican Party of Donald Trump has become so enthralled with Dear Leader that they have abandoned any pretense to...

Sixteen months after the 2020 presidential election Donald Trump is still whining petulantly about the election being "rigged" and "stolen"...

(28)
$19.99 $9.99 (as of May 18, 2022 20:58 GMT -04:00 - More infoProduct prices and availability are accurate as of the date/time indicated and are subject to change. Any price and availability information displayed on [relevant Amazon Site(s), as applicable] at the time of purchase will apply to the purchase of this product.)