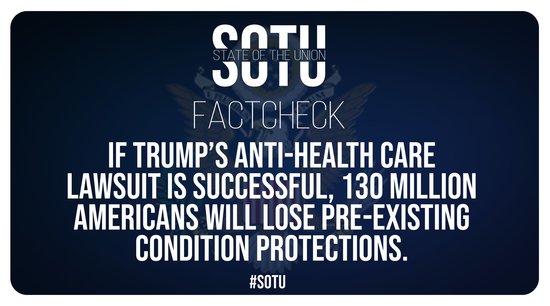 SOTU was simply an expanded campaign speech that included a few stunts like a reunion, a scholarship award, and a medal presentation. His speeches have tended to lies, this SOTU is no different. Yet there were even more lies besides the stunts and appeals to evangelicals.

Madam Speaker, Mr. Vice President, members of Congress, the first lady of the United States and my fellow citizens, three years ago we launched the great American comeback.

Tonight, I stand before you to share the incredible results. Jobs are booming, incomes are soaring, poverty is plummeting, crime is falling, confidence is surging, and our country is thriving and highly respected again! America’s enemies are on the run, America’s fortunes are on the rise, and America’s future is blazing bright.

The years of economic decay are over. The days of our country being used, taken advantage of, and even scorned by other nations are long behind us. Gone too are the broken promises, jobless recoveries, tired platitudes, and constant excuses for the depletion of American wealth, power, and prestige.

In just 3 short years, we have shattered the mentality of American decline, and we have rejected the downsizing of America’s destiny. We are moving forward at a pace that was unimaginable just a short time ago, and we are never going back!

I am thrilled to report to you tonight that our economy is the best it has ever been. Our military is completely rebuilt, with its power being unmatched anywhere in the world – and it is not even close. Our borders are secure. Our families are flourishing. Our values are renewed. Our pride is restored. And for all these reasons, I say to the people of our great country, and to the Members of Congress before me: The State of our Union is stronger than ever before!

The vision I will lay out this evening demonstrates how we are building the world’s most prosperous and inclusive society – one where every citizen can join in America’s unparalleled success, and where every community can take part in America’s extraordinary rise.

From the instant I took office, I moved rapidly to revive the United States economy – slashing a record number of job-killing regulations, enacting historic and record-setting tax cuts, and fighting for fair and reciprocal trade agreements. Our agenda is relentlessly pro-worker, pro-family, pro-growth, and, most of all, pro-American. We are advancing with unbridled optimism and lifting high our citizens of every race, color, religion, and creed.

For a person who claims to oppose socialism, President Trump spent a lot of time in his SOTU address touting central planning, federal intervention in nonfederal matters, and a big-government spending spreeÃ¢Â€Â”policies that threaten our rights and undermine our long-term prosperity.

.@SRuhle on President Trump's #SOTU statements on the economy: “Why does he start by saying he took us out of years of economic decline? … We're in the tenth year of an economic expansion, which was obviously started in the Obama administration.” pic.twitter.com/ZdmUJYhjla

Trump claiming credit for the work of Obama again. https://t.co/fNJ9ugeyey

So there are false claims even in the *advance excerpts* of Trump's State of the Union.

One big one: “We will always protect patients with pre-existing conditions.” Fact check: pic.twitter.com/BzfnJGKZcu

More #TrumpLies during the #TrumpSpeech at the #SOTU

Ã¢Â€ÂœThanks to our bold regulatory reduction campaign, the US has become the number one producer of oil and natural gas anywhere in the world, by far,” Trump said.

The US became the world's top energy producer under Obama in 2012 pic.twitter.com/cxoOoR4i8g

donÃ¢Â€Â™t be surprised if itÃ¢Â€Â™s way over 120K by the end of the speech https://t.co/OSX0UIviUr

Donald TrumpÃ¢Â€Â™s 2020 State of the Union was, unsurprisingly, depraved. But the speech showcased the kind of rhetoric we can expect from his reelection campaign in the fall Ã¢Â€Â” rhetoric that a weak-tea centrist liberal candidate won't be able to defeat.  https://t.co/BTVa2zGWcJ

The predictable hollowness and absurdity of the speech notwithstanding, its contents gave a preview of what’s to come next fall when the president seeks reelection. Though Trump’s rhetoric has never matched his record, tonight saw him striking a populist cadence on trade and posturing as the guardian of Medicare and Social Security. The phrases “pro-worker” and “blue collar boom” both made an appearance even as he blasted a “socialist takeover of our healthcare system.” Lurid tabloid imagery of immigrant crime and foreign invasion tied it all together, plus exclusionary nationalism and phony populism.

Whatever its grotesqueries, it’s a message that cannot and will not be defeated by the rhetoric and policies inexplicably still in vogue among centrist liberals. As 2016 demonstrated, technocratic liberalism married with vague uplift and an empty rhetoric of inclusion is woefully vulnerable to Trump’s brand of noxious populism. Tonight’s State of the Union is a dire warning about what may lie ahead if Trump’s reelection campaign is gifted with yet another establishment Democrat as an adversary in November.

Cranked up, most likely on stimulants and Levodopa, Trump struggled all night with body jerking, teeth baring, arm trembling and a podium death grip. His dementia Tour de Force climaxed with this neurological body jerk/spasm. pic.twitter.com/sQ0BGId3oJ