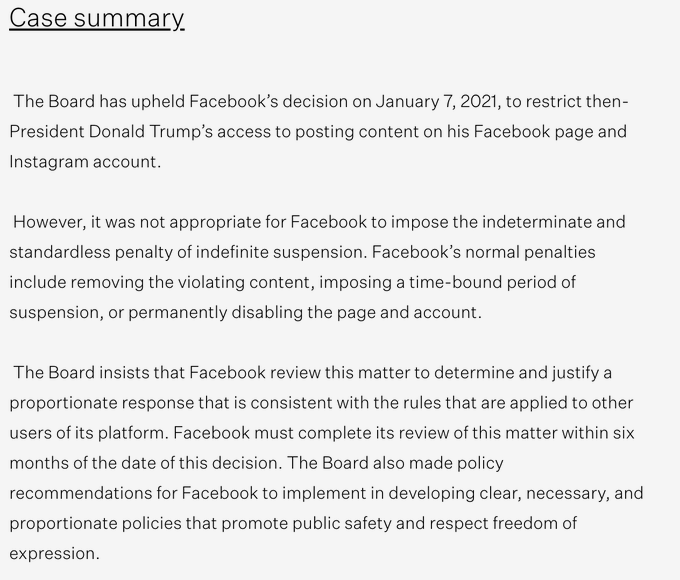 The Facebook Oversight Board sustained the ban on Trump — for now.

Previous guy added a page to his website, one which mimics Twitter and Facebook in its appearance, because the grift needs to be fed. In a related story, Bloomberg reports that demand for butt implants rose during the pandemic.

Apparently self-regulation might work, at least for another six months with marginally less Trump disinformation. But Trump could still return to Facebook. So still, the feds should audit Facebook, regardless of its oversight board decision on previous guy.

It’s a monumental development that comes after Trump was indefinitely banned from Facebook, Twitter, and other social media platforms following the deadly Capitol siege on January 6, which he’s been accused of inciting.

Per the board’s rules, Facebook has seven days to enforce to board’s binding decision on the content in question. The board’s decision cannot be overruled by any employees, including Facebook CEO Mark Zuckerberg.

Facebook's Oversight Board will not allow Trump back on the site for now.

I previously investigated the deep roots of the stop the steal strategy – promoted through Trump's social media accounts and further fuelled by online conspiracies like QAnon. https://t.co/Lg7pWSWP70

Finally, we urged Facebook to conduct a review into its contribution to the narrative of electoral fraud and political tensions that led to the events of January 6. This should look at Facebook’s design and policy choices that may allow its platform to be abused.

If you're reading the Trump decision this morning, take a look at @lawfareblog's Facebook Oversight Board tracker (maintained by MVP @tia_sewell). We have all the case documents in one place along with data on its rulings. https://t.co/4J5SJy4ljY https://t.co/ohy0yHcn6p

“Knowingly repeating a lie — an act of immorality — is now the evidence of Republican fidelity.”

Trump allies say he will be able to be a winner no matter what: Even if Facebook keeps him off, he will wield “cancelled” as a cudgel; back on, he can declare victory, crowing about the caving of “Big Tech” titans. “It’s win-win for DJT either way,” former Trump campaign adviser Sam Nunberg told me. “The movement he built is omnipresent throughout social media, like a MAGA blockchain. Trump’s power throughout social media is no longer any one verified account,” fellow former adviser Taylor Budowich said. “To really cancel Trump, Facebook and other platforms would have to cancel a majority of their most engaged users.”

Others, though, from internet experts and analysts to political professionals from both parties, remain almost shocked at the extent to which Trump’s been quieted by his Silicon Valley silencing — stripped of his capacity to say exactly what he wants to say whenever he wants to say it straight to what was his aggregate more than 100 million followers on YouTube and Twitter and Facebook.

“He’ll try to spin this thing either way, but the problem is he needs the outlet,” longtime New York-based Democratic strategist Hank Sheinkopf told me. “He is hampered existentially because he cannot attack an enemy in an unfettered fashion to a particular population on a constant basis.”

“It’s really important that he have access to that audience,” said Eric Wilson, a Republican strategist who led Marco Rubio’s digital efforts in his 2016 presidential campaign. “The decision on Wednesday is consequential for Trump’s political future — if you’re not there, and not able to shape that conversation, it’s catastrophic.”

“He’d certainly,” said Eli Pariser, the author of The Filter Bubble and the co-founder of Upworthy, “have to be a very different candidate without those platforms.”

Oh, bravo to these most masterful of Trump trolls! 👏🏻 pic.twitter.com/MqLZJ49Zt0

Facebook’s Oversight Board, the latest creation from the social media site that has repeatedly promised to regulate itself with little in the way of positive results, will announce on Wednesday whether it will let the disgraced former president back on its platform. Remember: This is a man who instigated an insurrection and spread dangerous disinformation about covid-19. Nothing has changed since he was banned; indeed, he has habitually reaffirmed the Big Lie that the election was stolen and denied his own role in setting off the violent riot that left five people dead and injured scores more.

Why, then, would Facebook, which claims to patrol for hate speech and dangerous disinformation, let him back on? The Post recounts what the company’s chief executive, Mark Zuckerberg, said when the former president was banned for praising the violent insurrectionists as “patriots” and “special”:

First Facebook and then Twitter suspended Trump’s account that week on the grounds that those comments were encouraging or inciting further violence and lawbreaking to delegitimize the election — or worse, to conduct an attack on the inauguration itself.

“The shocking events of the last 24 hours clearly demonstrate that President Donald Trump intends to use his remaining time in office to undermine the peaceful and lawful transition of power to his elected successor, Joe Biden,” Zuckerberg posted [while insisting that] … “we believe that the public has a right to the broadest possible access to political speech, even controversial speech.”

“But the current context is now fundamentally different, involving use of our platform to incite violent insurrection against a democratically elected government,” he wrote.

Is Facebook waiting for him to incite the next riot before really, absolutely banning him for good?

Facebook “oversight” board is a made for media thing like the rose ceremony on the bachelor. It’s a magic trick from Zuckerberg.

In spite of “Cyber-Ninjas”, the audit that Arizona Republicans promised has become a partisan snipe hunt.

Conspiracy theories about the election have proliferated across the country even before President Joe Biden’s victory but have had particular staying power in Arizona. https://t.co/d9vVhtRhVF

But the lie of a stolen election is the foundational falsehood of a political worldview. Believing it requires Trump’s followers to affirm the existence of a nationwide plot against him and his supporters — a plot led by ruthless Democrats and traitorous Republicans, and ignored or endorsed by useless courts and a complicit media. The claim’splausibility is not the point. Does it really make sense that Attorney General William P. Barr, who found no evidence of election fraud that could have changed the result, was in on the plot? Were the conservative judges Trump appointed who dismissed his rubbish lawsuits really out to get him?

Such considerations don’t seem to matter. In the 1930s and ’40s, was it plausible that the democratic leaders of Weimar Germany had stabbed their own country in the back and betrayed its people? Or that an international conspiracy of powerful Jews was controlling world events?

Trump’s lie is not the moral equivalent of fascist propaganda. But it serves the same political function. A founding lie is intended to remove followers from the messy world of facts and evidence. It is designed to replace critical judgment with personal loyalty. It is supposed to encourage distrust of every source of social authority opposed to the leader’s shifting will.

Q: Will you commit to a peaceful transfer of power after the election?

TRUMP: "We're gonna have to see what happens." pic.twitter.com/Dzj7Q9ZJqv

False claims spread online this week, including an inaccurate story about the vice president's children's book and misinformation about the ballot audit in Arizona. Get the facts from @AP's Not Real News. https://t.co/EvP8gM8DN1

Polite reminder: just because you've had your Covid jab doesn't mean you can lick the paintings when we reopen.

(42754)
$0.00 (as of May 15, 2022 08:59 GMT -04:00 - More infoProduct prices and availability are accurate as of the date/time indicated and are subject to change. Any price and availability information displayed on [relevant Amazon Site(s), as applicable] at the time of purchase will apply to the purchase of this product.)