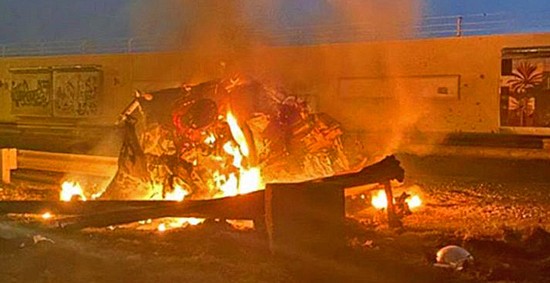 Nov 20, 2019 'Everyone Was in the Loop' Ambassador Gordon Sondland testified that President Trump ordered a pressure campaign on Ukraine and that senior-most administration officials knew about it.

When GOP senators acquit Trump they will be in the loop — they will join the Cover-Up, and vulnerable senators will have to run on that in November. Bolton could also be another reason for ordering the assassination of Qassem Soleimani, aside from its opportunity and potential for distraction. It’s a sign of that transactional desperation that among means for survival that Trump would pick the most lethal option given how his tormentors were closing in.

Just a few days after the WH received Bolton's book, on 1/3/20, Trump ordered an attack on Iran and the killing of Soleimeini, a dream come true for Bolton. Is it a stretch to think Trump may have been partly motivated by a hope this move would appease Bolton & keep him quiet?Ã°ÂŸÂ¤Â”

Nevertheless, IMPOTUS* is freaking out:

…(Democrats said I never met) and released the military aid to Ukraine without any conditions or investigations – and far ahead of schedule. I also allowed Ukraine to purchase Javelin anti-tank missiles. My Administration has done far more than the previous Administration.

For both commercial & patriotic reasons, Simon & Schuster should get BoltonÃ¢Â€Â™s book out now & dare Trump to kill it. S&S publishes Bob Woodward; they know this drill.

I honestly donÃ¢Â€Â™t get it. Did the GOP think the Bolton stuff wouldnÃ¢Â€Â™t come out until March & they would get to acquit 45 before then? Did they think nothing would leak? Did they think no one would care?

What the hell was the plan?

What is WRONG with them?

Excellent point that WH counsel Cipollone knew about the contents of the Bolton manuscript explicitly linking the aid hold to investigations. What else does he know? https://t.co/DMexLNBER6

Before this started, Dems made sure to get on the record, “Hey, Pat, you're part of the cover-up.”

If WHCO got the book and shared it with Trump for trial strategy, that raises the stakes of Cipollone's role.

Doubt if CJ Roberts will call Cipollone out under any circumstances, but he won't do it unprompted. (We call that “sua sponte” in the law because we like to use random Latin terms.) The only slim hope of Roberts taking action is if Dems put him on notice with a formal motion. https://t.co/I2Smfg8WM2

Tomorrow we outline a simple way for Americans to hear from witnesses, even if the Republican Senate wants to block them. Given BoltonÃ¢Â€Â™s news tonight, it would profoundly betray our Constitution to try to prevent these witnesses from telling the truth. If Rs try,there is a remedy https://t.co/A6OsoJGgBb

And here is the letter Cooper sent to NSC: pic.twitter.com/sqZwdbcoTp

The fact that book publishers know more about Trump's bribery scheme and cover up than U.S. senators who are right now weighing whether to remove him from office is the height of absurdity.

With this GoFundMe, sheet cakes will be delivered to every GOP Senator's office. The frosting will write out the key passage from John Bolton's book that makes the truth 100% clear: Trump violated the Constitution and abused the power of his office. Ã°ÂŸÂÂ° https://t.co/pEQHnV9qxQ

Vigorish, or simply the vig, also known as juice, under-juice, the cut or the take, is the amount charged by a bookmaker, or bookie, for taking a bet from a gambler. In the United States, it also means the interest on a shark's loan. The term originates from the Russian word for winnings, выигрыш vyigrysh.

(43136)
$0.00 (as of May 20, 2022 02:35 GMT -04:00 - More infoProduct prices and availability are accurate as of the date/time indicated and are subject to change. Any price and availability information displayed on [relevant Amazon Site(s), as applicable] at the time of purchase will apply to the purchase of this product.)