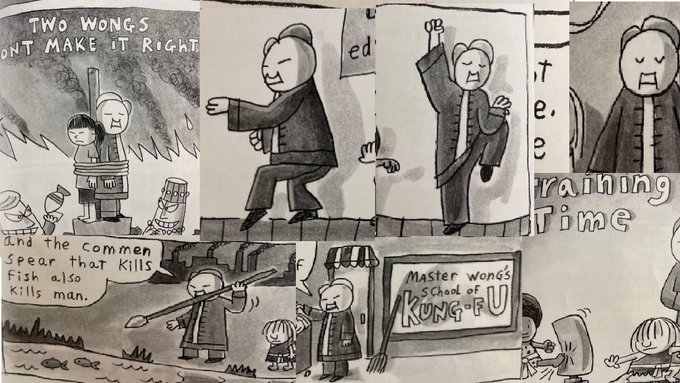 Not a victory for cancellation as perhaps poorly vetted stereotypes best left for an era when Bruce Lee couldn’t be chosen for the lead of a TV series.

Dav Pilkey, whose Captain Underpants has its own issues but remains popular, agreed with the withdrawal of his latest ‘graphic novel’ by its publisher, one that concentrates on children’s education publications.

A focus group should have been deployed in a 21st Century editorial decision that could have incorporated martial arts in the narrative without indulging an anachronistic trope. As the accounting software advertisement says, “More Mercy”.

“Together, we recognize that this book perpetuates passive racism,” the company that publishes “Captain Underpants” said. “We are deeply sorry for this serious mistake.”

On March 25, 2021, Dav Pilkey announced on his YouTube channel stating that he and Scholastic have removed the book from print due to some racialstereotyping harmful to Asians.[4][5]

According to the video, all money that Pilkey and his wife have made from the book will be donated to “charities that provide free books, art supplies, and theater for children in underserved communities; organizations that promote diversity in children’s books and publishing; and organizations designed to stop Asian hatred.”[5]

Scholastic said "The Adventures of Ook and Gluk" will no longer be sold, adding that Pilkey was supportive of the decision.https://t.co/hTAbaUJye2

In more active forms of racism, the kidnapping and assassinating of a United States Governor seems mayhemish. But that level of terrorism seems more ‘passive’ in the case of domestic terrorists planning to abduct and kill the Governor of Michigan.

NEW: A judge has dismissed threat of terrorism charges against three men accused in a plot to kidnap Michigan Gov. Gretchen Whitmer

"There has to be some form of intent here to incite mayhem," the judge saidhttps://t.co/WUh95L2VG8