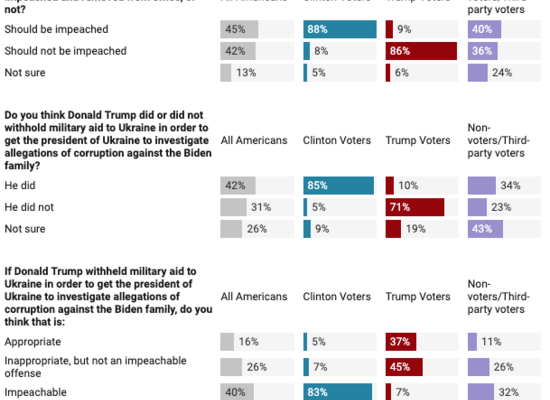 The 120 page ruling on the order for the McGahn testimony came in today. McGahn must comply and testify before Congress. Executive Privilege is limited. Expect a WH appeal. It rejects the Trump argument for absolute immunity.

“Therefore, DOJ’s argument that the House of Representatives, which unquestionably possesses the constitutionally authorized power of inquiry and also the power of impeachment, should not be able to issue subpoenas to executive branch officials because the President cannot do the same to them, simultaneously appreciates traditional separation-of-powers principles and subverts them, and as such, truly makes no sense.” (p.114)

Judge Ketanji Brown Jackson will almost certainly rule correctly by Monday that President Trump’s order silencing Don McGahn is a lawless interference with the House Impeachment Inquiry and that McGahn must comply with the subpoena issued by the House.

The ruling against McGahn will “provide cover for other witnesses, especially former employees who are inclined to testify but feel compelled by the White House’s direction not to.” https://t.co/ASEagPiGlk

President Trump blocked McGahn’s appearance, saying McGahn had cooperated with Mueller’s probe, was a key presidential adviser and could not be forced to answer questions or turn over documents. Jackson disagreed, ruling that if McGahn wants to refuse to testify, such as by invoking executive privilege, he must do so in person and question by question.

Jackson ordered McGahn to appear before the House committee said the conclusion she reached was “inescapable” because a subpoena demand is part of the legal system — not the political process — and “per the Constitution, no one is above the law.”
“However busy or essential a presidential aide might be, and whatever their proximity to sensitive domestic and national-security projects, the President does not have the power to excuse him or her from taking an action that the law requires,” Jackson wrote in a 118-page opinion. “Fifty years of say so within the Executive branch does not change that fundamental truth.”

Democrats are debating whether articles of impeachment should include obstruction of justice allegations detailed in the by Mueller, and McGahn could prove a crucial witness.
Intelligence Committee Chairman Adam B. Schiff (D-Calif.) said Monday that House investigators will transmit a report on Trump’s conduct in the Ukraine controversy to the Judiciary Committee shortly after Congress returns from Thanksgiving recess next week.
In a letter to colleagues, Schiff underscored that stonewalling by the White House could form the basis for a separate article of impeachment.
“Given that the House’s impeachment inquiry is proceeding rapidly, the Committee has a finite window of time to effectively obtain and consider McGahn’s testimony,” House General Counsel Douglas Letter had written last week in asking the judge to move quickly.

There is a mechanism for Supreme Court to take and review McGahn ruling right away, skipping the Court of Appeals.

This happens very rarely but it did happen in the 1974 Nixon tapes case.

and in other losses:

As unfortunate as disinformation has become the coin of the realm, there’s more trending toward the necessity of impeachment even if there’s unease for the removal of PABOTUS*.

Based on these numbers, don't see how the politics of impeachment help Republicans. Still tricky if you're a swing-state Senate Republican like McSally or Tillis.