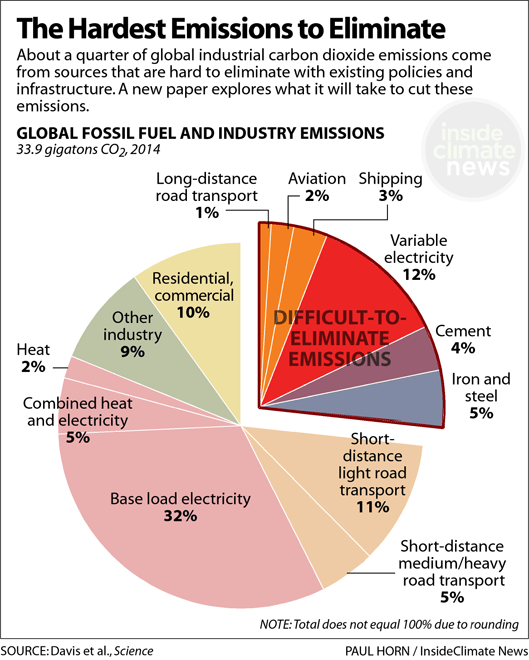 We’ve all seen this annoying line of argument from people opposed to us cleaning up our act with respect to the environment:

Oh, you FLEW over here, now didn’t you? You’re such a hypocrite – that airplane emits tons of CO2. But you did it because there’s NO OTHER REASONABLE OPTION, right? Batteries aren’t even close to the energy density of fuel needed for air travel!  That’s the problem with you people, you want us to do things that are TOTALLY IMPRACTICAL, and don’t even live up to your own rhetoric!

While every part of the above will be addressed, the primary response to this can be encapsulated in this graph:

While I would disagree about a number of the things they list as “difficult to eliminate” — long-distance EV road transport can be handled by things like the Tesla Semi, pozzolanic concrete mixes and FRP rebar can significantly lower CO2 footprints while increasing longevity, there’s many “green steel” projects in the works, etc — there’s no question that shipping and in particular aviation are in the “difficult” category.  But difficult does not mean impossible.  So rather than just throwing up our hands, we need to pick the easy, low-hanging fruit while focusing on building a ladder to the high-hanging fruit.

And that means electric airplanes.

You may or may not have seen in the news recently that NASA has reached a critical milestone with its X-57 electric test aircraft programme, thanks to the arrival of its fuselage for wing-integration:

This is, however, neither the beginning nor the end of the story. We’ll come back to it in a bit, but first let’s back up to the fact that… electric airplanes that you can buy already exist today.

A 2-seat light trainer made by Pipistrel (a Slovenian aircraft manufacturer), it’s designed for flight schools, where its low fueling cost, minimal maintenance, short takeoff distance, and high reliability make it ideal for the role (the company claims that it can cut the cost of pilot training by up to 70%). The aircraft offers one hour of flight time (plus a 30-minute reserve), and — in true electric fashion — can regenerate up to 13% of its energy on descent / landing.

To see it in action, watch EV enthusiast Bjørn Nyland taking a ride in one:

Now, a small electric trainer is great — but it’s not going to do anything for actually addressing passenger craft. But companies are already taking the next logical step.  This, for example, is the Eviation Alice at the Paris Air Show:

While there’s currently over 170 different electric aircraft programmes in development, the Alice is the furthest along. With certification expected in 2021 and entering service in 2022, the Alice — assuming none of its competitors move their schedules up — will become the first electric passenger aircraft in the world.  Massachusetts-based Cape Air has already ordered a “double digits” number of them.

At nine passengers and two crew, it’s small — although larger variants will follow (the physics of an electric aircraft doesn’t get more difficult with size — it actually gets easier; however, nobody is going to fund the development of A380-sized electric aircraft as their first model!). The $4M craft powered by 900kWh of li-ion batteries has a cruising range of 650 miles (about the distance from Chicago to Philadelphia) at a cruising speed of 300mph. The battery pack is designed to recharge during the time the craft spends at the gate, with no additional wait time required. Powertrain maintenance schedules are minimal, and fueling costs are low

Optimizing for electric propulsion led to some unusual design elements, like wingtip props and a flat lifting body — the latter of which can be seen in the background below:

The design offers an amazing 24:1 lift-to-drag ratio — most commercial aircraft are in the 12:1 to 20:1 range. 10% of this boost comes from the wingtip props alone.  These props are actually secondary, and primarily for the purpose of reducing drag and increasing stability; primary propulsion comes from the rear tail prop.  The Alice also avoids the sort of induced drag from air intakes that all fuel-burning aircraft must include.

This leads us back to the earlier claim that electric vehicles opponents frequently use:

Batteries aren’t even close to the energy density of fuel

Gasoline is 45MJ/kg, while li-ion cells are only 0,9MJ/kg — clearly gasoline cars are 50 times better, right?

Let’s take a look at that.  The Tesla Model 3 LR Performance is generally considered to be the same vehicle class as the BMW 3-series. Its closest performance match is the BMW 340i xDrive — although it’s still a long ways off:

Wait a minute… the Model 3 is only marginally heavier, and goes a good fraction as far, but vastly blows out the BMW on performance.  Indeed, if you wanted to add that extra performance to the BMW, it’s mileage would fall further and its weight would rise further.  How can it be that batteries can have 1/50th the energy density, yet cars powered by them be on the same mass/performance/range spectrum as gasoline cars?

Part of it is of course efficiency; EV motors average in the low to mid 90s % efficiency. Gasoline engines peak at about 35-40% efficiency, but average 20-25% efficiency (hybrids shift the average closer to the peak).

Part of it is energy recovering from braking and a lack of idling (like hybrids) — although these are lesser issues.

None of these however are the real issue; the real issue is that you’re not driving around a puddle of gasoline, and you’re not driving around a pile of battery cells.  A whole transportation device is vastly more than just its energy source.  These design impacts are heavily influenced by the choice of energy source.  And it just so happens that most of the changes are highly advantageous to electric vehicles.  Some examples:

… and many more things.

The exact same synergies apply to electric aircraft — which make simple “energy density comparisons” with piston or jet aircraft naive at best, and useless at worst. Indeed, the benefits for aircraft electrification (primarily from drag reduction) appear to be even greater than for cars.

Notice how… well, unusual that wing design is — even compared to that of the Alice.  The small props increase the airspeed over the wing, allowing for shorter takeoff distances from a given wing area, and increasing the L/D ratio in flight. You cannot practically implement a design like this with a non-electric aircraft. NASA expects this design to have only 60% of the drag of a conventional wing/prop approach.

Note also how short the chord of the wing is. Normally this would be a problem for stall or even dealing with gusts — however, the instant, individualized electric throttle response on the mid-wing props can immediately compensate for any loss in lift. The higher-drag props closer to the fuselage are designed to fold-back out of the airstream when not needed, leaving the more efficient outward props to provide thrust.  The overall design is also expected to produce significantly less noise on takeoff.

Long-haul air travel, thus, remains the hard-to-pick fruit at the very top of the tree.  Let’s take a moment to look at the two remaining pieces of this picture:

Let us examine the achieved and theoretical energy densities of some various battery chemistries.

** Note: Air-cathode cells increase in mass as the cell is discharged. This is a mixed bag — obviously increasing lift (and thus drag) requirements, but also increasing gravitational potential energy. Except where otherwise indicated(**), energy density figures above account for the oxygen (e.g. landing mass rather than takeoff mass).

*** The above table does not represent the upper limit of potential battery energy densities by any stretch. The lithium-oxygen bond is hardly the strongest chemical bond known to science (lithium fluoride, various boron compounds, etc all have greater energy density).

It should be obvious that batteries are not even remotely close to their theoretical limits. And while the push for electric vehicles has focused more on cost than energy density, the focus will heavily switch to energy density for electric aircraft as they begin — pardon the pun — to take off.  And while all of these numbers are less than the energy density of aviation fuel (43,5MJ/kg), remember that they don’t need to be anywhere close; electric propulsion is more efficient, leads to craft mass savings (e.g. further energy savings), and significantly improved L/D ratios (e.g. even further energy savings).  And even if one never achieves equivalent range, and only ever gets, say, half the range of the best fuel-burning aircraft… what’s the worst case for your next flight from San Francisco to Melbourne? A brief stopover in Hawaii? Yes, I think people will somehow survive.  😉  So long as an option is A) viable, and B) offers reduced operations costs, airlines will adopt it widely.

The Eviation Alice’s cruising speed is 300mph (with a never-exceed speed of 390mph). Does this mean that all electric aircraft will have a cruising speed like that?

An aircraft — assuming that it’s mass does not change — has a constant lift requirement. While drag rises in proportion to the square of the velocity, so does lift. To maintain a constant level of lift at a higher velocity, an aircraft climbs to a higher altitude, until the reduced air density lowers the lift force (and correspondingly, drag force)  down to the desired level. Net result: drag force remains the same but the aircraft moves faster.

(This is somewhat of an oversimplification, as L/D coefficients can change with velocity, but it’s a rough idea).

So what limits the Alice’s cruising speed?  Well, a couple things.

The fastest prop-driven aircraft record in level flight is that of the Tu-114 at 541,45 mph (0,71 mach).  While in theory, the advantages of electric aircraft aerodynamics might allow for faster speeds with subsonic props, that’s nearing the limits of what is reasonably possible — especially for a passenger aircraft.  To get greater speeds, one has to take any of several different paths.

That’s the XF-84H Thunderscreech — and its name right there points out one of the main drawbacks to supersonic props: they’re extremely loud. While properly located supersonic props do not impose excessive noise to the passengers of the aircraft, the whirling trail of sonic booms they leave behind them can be deafening. It would only be acceptable to fly such an aircraft at high altitudes over the ocean.  Thankfully — as noted with the X-57 — electric aircraft can use as many props as they want, due to how effectively the motors scale down — and thus rely on subsonic propulsion while near land.

Another disadvantage to supersonic props is that they’re less efficient than subsonic ones — although the difference declines with increasing speed.

All of these options are less efficient than subsonic props, but not impractically so, where speed is of importance. Indeed, there’s several reasons why electric aircraft have — in the long term —  better potential for supersonic passenger service than fuel-propelled aircraft: