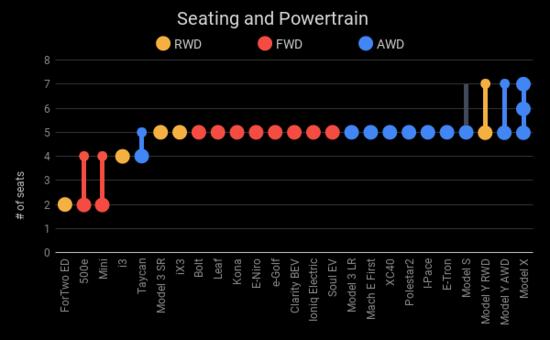 2020 is almost upon us, and there’s many people out there who will be making a New Year’s resolution to buy a new electric car during the course of the year.  The number of offerings on the market keeps expanding every year, so what will this year look like?  Join us for a very deep dive into all mass-market electric cars (e.g. excl. trucks, vans, etc) that will be on the market in the US (this information took a long time to collect and turn into all of these graphics!)

This is part one of a three-part series. “Part 2: Price, Performance, Efficiency, Range and Charging” will be posted tomorrow, followed by “Part 3: Cargo, Internal and External Dimensions, Purchasing” the day after!

Every Electric Car Coming Out, Compared In Every Way.

Click the names to see them, skip if you know them, but let’s start by introducing…

Let’s begin with a straightforward plot of vehicle seating configurations and powertrains.

The caveats for the ones that aren’t simple circles include:

Towing and roof racks don’t matter to everyone, but they do matter to some people! Almost all vehicles can technically have roof racks or towing added aftermarket, but these are not included in the above, save for the Model 3 (see below).  Note that the best tower — the Tesla Model X — has no roof rack capacity at all, because its falcon-wing doors would interfere with one.

I wavered on whether to list the Model 3 in the above graph. The Model 3 is an exceptional case in that the vehicle is designed for towing, and in Europe offers an official tow hitch. However, Tesla has not made this hitch available in the US. An aftermarket supplier, EcoHitch, makes their own hitch which slots onto the vehicle’s hitch mounts for use in the US, and offers the same towing capacity. Since the vehicle actually is designed for towing, I decided to include it above (with caveats)

It has not been announced as to whether there will be a towing option for the Model Y, but spy shots have shown a Model Y towing. Capacity is guessed at the same as for the Model 3, of which it shares a platform, but it could be increased.

Several vehicles have announced roof racks, but not listed capacities. As 165lbs is a common capacity, it is assumed for vehicles that haven’t stated a specific value.

Safety ratings agencies — IIHS, NCAP, and the NHTSA — can be frustrating. For example, 40% of all vehicles (and most EVs) get 5-star ratings from the NHTSA, which makes it difficult to distinguish between them, when in reality there can be significant differences in the raw safety data. To help compensate for this, I add an additional column, the NHTSA VSS (Vehicle Safety Score), from which the star ratings are derived; the VSS is inverted and scaled so that the highest VSS (the Model 3) is ranked “5”.  This allows for a more nuanced view of the actual ratings.  Note that the VSS data is not always available, even when NHTSA star ratings are available.

For an extremely nuanced (but hard to read) view, I plot all ratings for all major categories by all ratings agencies.  Note that there are significant gaps in available.  Note that many types of ratings are unavailable for many vehicles.

As described for the previous graph, some vehicles had to rely on the ratings for their ICE equivalents.

For all vehicles currently in production and on sale in the US, the percentage of US/Canadian and other North American content is public information. For upcoming vehicles, it has to be estimated. For the above, I estimated Mini production to be similar to its ICE variants. Mach-E was estimated to be similar to other vehicles out of its plant in Mexico, although it could vary significantly from this estimate.  Other upcoming non-US-made vehicles are expected to have little to no North American content, as is the general rule for such vehicles today.

I initially wanted to have a third corporate responsibility measure in the above graph: “Unionized?”, but as I was investigating it, it proved to be a surprisingly complex topic that would require a whole article of its own.  Some examples:

If there is interest, however, I could compile a plant-by-plant history of unionization statuses and list any past worker conflicts.

In addition to corporate social responsibility, corporate financial health is a topic frequently discussed. Three measures are plotted.  The debt to equity ratio of a company reflects its ability to pay off its obligations by selling stock (low is good).  Debt-to-EBITDA reflects the ability of a company to pay off its obligations through its ongoing operations (low is good). And lastly, the Altman-Z score is a more complex measure used to assess the risk of a company going bankrupt (high means a low risk of bankruptcy).

Note that Tata (which owns Jaguar) doesn’t have a visible Debt-to-EBITDA ratio; this is because, in their last quarter, Tata posted a sizeable loss, and thus EBITDA was negative.