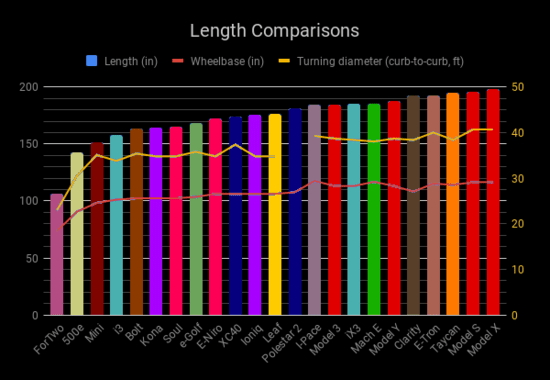 This is part three of our three-part series comparing all major electric vehicles that will be on sale in the US in 2020.  For “Part 1: Offerings, Basic Stats, Safety, and Manufacturers”, click here.  For “Part 2: Price, Performance, Efficiency, Range and Charging”, click here.

Every Electric Car Coming Out, Compared In Every Way.

Here is where we see some of the underperformers in the previous sections shine, and the overperformers suffer.

Vehicles like the i3, 500e, and especially the ForTwo shine in tight spaces, both due to their length and their tight turning circles. While a longer vehicle is good for aerodynamics (efficiency, range, charge times) and allows for a longer wheelbase, for a city car you generally prefer to sacrifice these to ease parking and turning.

Sports and luxury cars generally prefer a longer wheelbase (the distance between the axles). A longer wheelbase improves handling and ride quality, and allows for more efficient use of interior space (in EVs, it also makes more room for a larger battery pack).  However, the wheelbase tends to be highly correlated with turning diameter; you generally pay a price for having a longer wheelbase.

The stats for the XC40 Recharge, Mini, and iX3 are based on their ICE equivalents (and should be relatively unchanged).

Width comparisons are relatively straightforward, with compact cars like the Fiat 500e and Smart ForTwo at the bottom of the list and large / sporty vehicles at the top of the list, particularly the Model X.

Perhaps surprisingly, the Bolt and Leaf edge in narrower than the small BMW i3, and the Polestar 2, designed as a sports sedan, is also fairly narrow. In general, sporty vehicles prefer a wider track for better handling, in contrast to city cars which prefer a narrow track for easier parking.

Parking is indeed the reason that most vehicles top out at the width of the E-Tron or smaller, and why the Model Y — despite being engineered to be overall larger than the Model 3 — is no wider than it. Automated parking systems (particularly in Japan) frequently cannot handle vehicles wider than this.

Data for vehicles is generally provided on a “without mirrors” basis. Most, but not all, vehicles also publish widths for with the mirrors extended; where unavailable, I added in an “average sized” mirror to the vehicle width.

As a general rule, taller vehicles are preferred by customers for casual usage, while shorter heights are preferred in sporty vehicles for their better handling characteristics. A shorter vehicle also reduces aerodynamic drag, thus improving efficiency.

Ground clearance is a separate issue, and data is not available (even to make estimates) for all vehicles.  A low ground clearance generally improves efficiency and handling, but faces more of a risk of bottoming out.  The Model X and S have an adjustable air suspension, and thus both the minimum and maximum ground clearance data is provided.  Note that while some of these vehicles (particularly the Model X) have excellent clearance, and are good choices for bad roads or deep snow, offroading them is not advisable.  Model Y’s ground clearance is estimated based on a side-by-side comparison with the Model 3.

A few vehicles have data for liftover height (the height that you have to lift something up to get it into the trunk / hatch), which is plotted on the right.  The standouts in this regard are the Model 3, the e-Golf, and the iX3 (based on the X3’s data).

Not all vehicles have interior data available (such as the Taycan), while several others are missing certain elements. Note that the 500e isn’t actually missing rear hip and leg room data — they’re unfortunately off the bottom of the graph!  Contrarily, the Model X’s front shoulder room is off the top of the graph.

Unsurprisingly, the vehicles on the right tend to be larger and the ones on the left smaller. The Model 3, despite not being particularly large, scores a respectable position due to efficient use of interior space. Perhaps more surprising, the Clarity ranks third best, beating out the (physically large) Audi E-Tron, thanks to its superb shoulder room.

That said, the sorting is based on averages of front-seat parameters. An individual should choose the specific parameters that matter to them the most.

On the budget end, the Leaf and Ioniq are standouts for seats-up space, followed closely by the e-Golf, then the e-Niro and Kona. Model 3 has a relatively poor showing due to having a high-opening trunk rather than a full-height hatch; however, with seats down it slightly edges out the Leaf in space. That said, other budget EVs like the E-Niro and Ioniq beat it solidly in the seats-down category.

I suspect that the trunk volume up to the headliner for the Soul may actually be erroneously low, and might actually be a up-to-seats volume – but I can only graph the numbers as they’re given in various datasets.

In addition to trunks, some EVs also have “frunks” / front trunks (plotted in green). Some, like the i3, E-Tron, and I-Pace have small frunks, sized only for holding cables and the like. Teslas famously have large frunks; joining them in the large-frunk game are the Mustang Mach-E and the Taycan.

No vehicle is one-size fits all. Thankfully, the vehicle market has expanded to the point that there’s an EV out there for almost any new car buyer (as for trucks and vans, that’s the topic of an entirely different article!)

Some details cannot be graphed well. I cannot graph how comfortable a seat is for your back, or what you think about a user interface.  I could list every single tech feature in each car, but in practice, the best way for you to experience it all is to try the vehicles for yourself. Trust me, dealerships would be more than happy to let you!

A note for buying. Some vehicles are more popular / eagerly awaited than others and often have limited availability. Dealerships are known to gouge for such vehicles at prices over the MSRP. On the other hand, some of the less popular EVs can often be gotten at a discount, sometimes significant. Tesla is a special case, where they operate “stores” rather than dealerships, and even if you order a car at one, the actual order is placed online. Tesla prices are generally non-negotiable — although sometimes at the end of a quarter they might offer incentives (such as free upgrades) to people with orders in place to switch to a configuration that, due to inventory constraints, they can deliver before the end of the quarter.

An additional consideration is tax credits. Tesla’s tax credits expire at the end of this quarter.  GMs will only be $1875 until the end of Q1 2020, and then expire.  Other manufacturers get $7500 in tax credits. This can significantly distort the overall purchase price picture — assuming that you actually have $7500 in income tax liability!

If you missed the “Addendum for anti-EV readers only”, and you fall under that category, please read it at the end of the article here.  🙂

(28)
$19.99 $9.99 (as of May 19, 2022 03:04 GMT -04:00 - More infoProduct prices and availability are accurate as of the date/time indicated and are subject to change. Any price and availability information displayed on [relevant Amazon Site(s), as applicable] at the time of purchase will apply to the purchase of this product.)