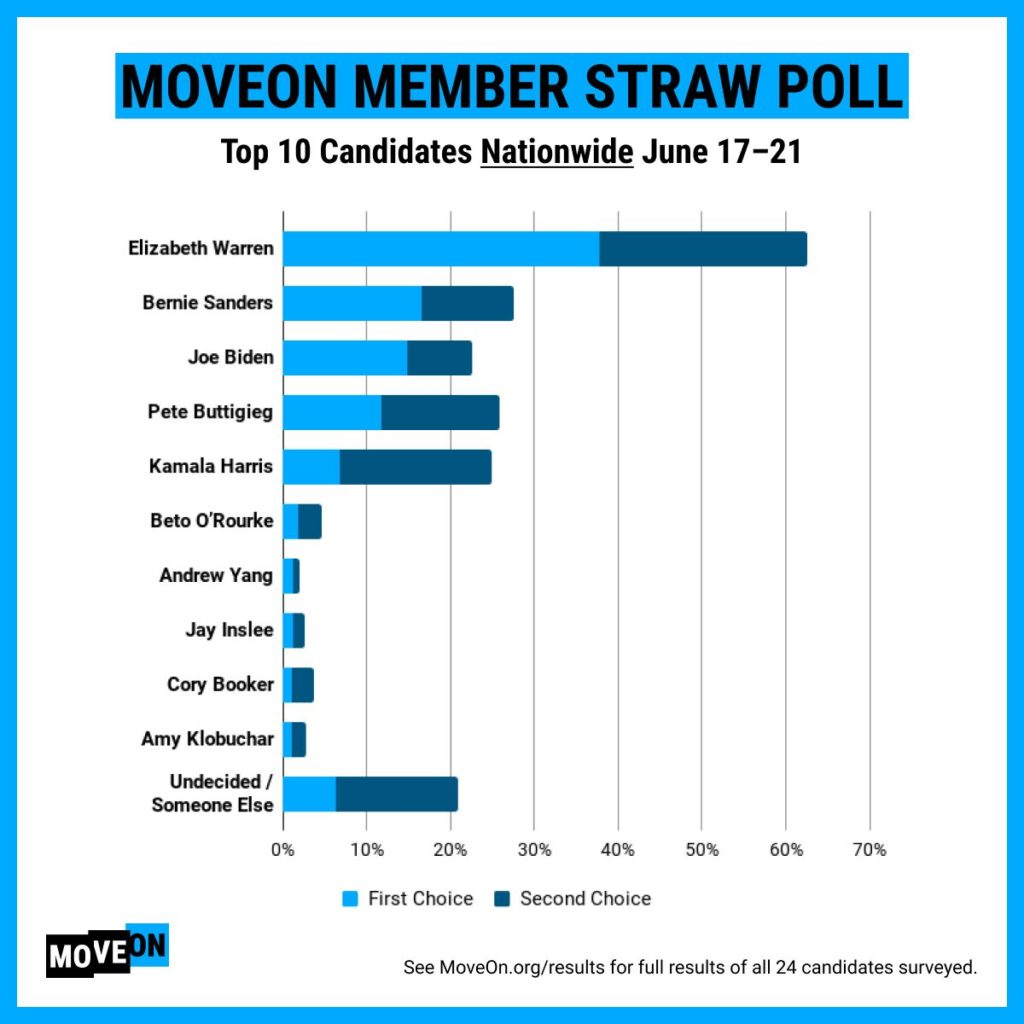 Members say they want a candidate who ‘inspires the public with deep progressive values’ and ‘makes the connections between racial, social, and economic injustice.’

Warren is the first or second choice of 63% of MoveOn members nationwide. This represents a substantial shift in MoveOn members’ support toward Warren since the organization conducted its first 2020 Democratic primary straw poll in December 2018. In that straw poll, MoveOn member support was up for grabs, with a plurality of MoveOn members either undecided or supporting a candidate not listed in the poll.

Sanders is the first or second choice of 28% of MoveOn members in the latest straw poll, with South Bend Mayor Pete Buttigieg (26%), Sen. Kamala Harris (25%), and former Vice President Joe Biden (23%) also ranking in the top five candidates among MoveOn members’ first and second choices nationwide. The straw poll was conducted from June 17-21.

MoveOn members surveyed said the top three qualities in determining who they will support for president are:

“MoveOn members make up a huge part of the Democratic Party’s base — and this poll is clearly good news for Sen. Warren, showing that she’s gained substantial support from MoveOn members over the past six months and is also well positioned to continue building support given that she’s also the top second choice candidate of our membership,” said Allison Pulliam, federal endorsement manager for MoveOn. “At the same time, our members continue to support a wide range of candidates, and all candidates have an opportunity to attract additional Moveon member support by making clear how they plan to advance a values-based progressive agenda that connects the dots between and advances social, racial, and economic injustice.”

Here’s what some MoveOn members had to say in responding to the straw poll:

Christina from New York on supporting Elizabeth Warren: “I support Warren’s progressive ideas. She has been consistent and outspoken throughout her time in Congress and has remained in touch with the needs of the middle and lower classes. Most importantly, she has a well thought out, documented plan for all her ideas.”

Jake from Florida on supporting Elizabeth Warren: “Senator Warren supports a wealth tax and a green jobs initiative. The two biggest issues facing our country are inequality and climate change. I want a candidate with the know-how to build a plan and the strength to follow through.”

Mollie from Alabama on supporting Bernie Sanders: “I have supported him for a decade. He is the only one with a reliable record and he has been on the right side of history for nearly 40 years. Medicare for All, free public college, income inequality, climate change, and gun violence are my highest priorities.”

Rae from North Dakota on supporting Bernie Sanders: “He has been fighting for regular Americans his whole political career. We need bold action on all fronts to get the country back on the right track. Bernie will provide that boldness.”

Bonnie from Connecticut on supporting Pete Buttigeig: “He has good qualifications – Rhodes scholar, military experience, government experience, and makes a lot of sense. He sounds very reasonable and makes his points in a concise, common sense manner. He is young and inspirational. He’s the ‘anti-Trump’ – walks softly and carries a big stick.”

Marcia from Washington on supporting Kamala Harris: “She’s brilliant and experienced. She’s very inspirational and a very strong role model. Kamala Harris has a multitude of plans to put our country back together again. She’s absolutely terrific.”

Shekita from Georgia on supporting Joe Biden: “Mr. Biden embodies all the values in legislation that President Obama put in place and helped put some of those legislations in place. He is a front runner to get [Trump] out of office.”

As the 2020 election approaches, MoveOn members cited climate justice, health care, and reproductive freedom as the three most important issues to them.

MoveOn is not endorsing a candidate at this time. Any endorsement will ultimately follow a formal vetting and member voting process after MoveOn member’s support has more fully coalesced behind one of the candidates.

For more information about the results of MoveOn’s straw poll, or to speak with someone from MoveOn about the 2020 Presidential election, please contact at [email protected]

(85484)
$0.00 (as of May 16, 2022 00:44 GMT -04:00 - More infoProduct prices and availability are accurate as of the date/time indicated and are subject to change. Any price and availability information displayed on [relevant Amazon Site(s), as applicable] at the time of purchase will apply to the purchase of this product.)