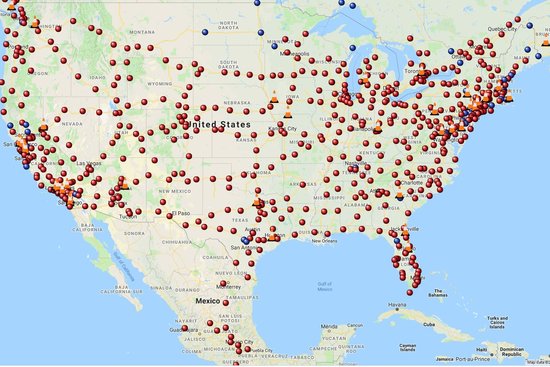 One of the greatest, if not the greatest reasons that many people hesitate to switch to an electric vehicle is the fear of… “What if I can’t get There from Here”?

Well, here’s the good news: You absolutely can.

We’ll start with Teslas, as they’ve long been the road-tripping champions, and then move onto other vehicles available today.

This is the Tesla Supercharger network as it stands today. While it’s planned to double in density by the end of 2019, let’s forget about that and look at the present. Note that in the continental US, the only place with no coverage is north/eastern Montana and North Dakota.  That said, clearly some places are sparser than others.

Let’s try to make the challenge tough on ourselves; let’s say that you want to go from one “hole” — say, southeast Oregon (McDermitt, perhaps?) to another “hole” — say, Liberal, Kansas?  Let’s pull up A Better Route Planner (a trip simulating tool with conservative parameters), and tell it that we start at 100% charge in a Model 3 RWD Aero, and never want to run down below a 15% state of charge:

Red “T”s are places where it stops to charge, while grey ones are not stopped at. Notice anything early on?  That’s right, it doesn’t even bother to stop at the first charger it passes!  It goes straight onto the second charger.  And from that last stop at the Colby, KS Supercharger?  It only has to charge up to 61% to reach Liberal with a 15% charge remaining.

This is what modern EV ranges mean: these “holes” are not “holes” in the map at all — just less-dense areas.  You can still quite easily drive to the nearest Interstate, take it to near your final destination, then drive off it to your destination, with no worries.

But wait, it gets better!  Remember — I pointed out that these are just Tesla Superchargers. Because there’s plenty more types of charging stations you can use. For this, we turn to Plugshare and zoom in at a random point in the Midwest as an example:

The green chargers are AC chargers, which all EVs can use.  The orange ones are a mix of Superchargers and CHAdeMO / CCS chargers.  To sum up what these mean:

Now, I hear you saying… “that’s all well and good, but the issue is not just that one could theoretically road trip that’s the issue… it’s that nobody can be bothered to spend so long charging!” Except, charging times aren’t actually that long; you can charge in the time you spend on meal and bathroom breaks.

Don’t believe me?  Let’s look at the numbers.  Here’s how much power a Model 3 gets on a V2 Supercharger (higher-power V3 Superchargers will start coming out early next year):

These are not some sort of theoretical figures (except for the bottom end, which lacks datapoints); this is actual charge-session data autocollected by ABRP. Note the general pattern: steep rampup, plateau at just under 120kW to 50%, then a linear taper thereafter. Note that the taper is the reason that one generally does not charge to 100% on road trips — only to the amount that they need to get to their next stop.

How far can you go on that power?  Well, to that we turn to more real-world data. Here is data from drivers traveling in various summer conditions: various road configs, various weather conditions, various traffic, various payloads, various driver behavior…. etc.  Just a random cross section of the real world.  All of the vehicles are Model 3 LR RWD, but some are on the more efficient aero wheels while others are on the less efficient 19” sport wheels.

You can see how noisy the data is, but also the clear energy consumption trends. So if you take a typical average trip speed — let’s say 30 m/s (67 mph), and thus around 15kW. This is a very low consumption figure (Model 3 is the second most efficient mass-produced EV, after the smaller and much shorter-range Hyundai Ioniq, in combined-cycle driving — and slightly edges it out in highway driving).

Let’s make it worse. While 67mph at 15kW is 223Wh/mi, many people will drive faster, or in  sporty configs. Let’s say 250Wh/mi. Heck, a sporty config, high-speed driving or winter weather may push it over 300Wh/mi (and on short winter trips even worse, although said power consumption drops off significantly on long trips after the car and battery warm up). 250Wh/mi is a reasonable figure for a RWD variant in decent weather whose driver wishes to be efficient rather than show off.  🙂

Adjust as per the actual charger spacing, your actual consumption, your preferences on the balance of stops, driving times, your personal comfort levels for charge state at arrival, etc.

As can be clearly seen, even on V2 superchargers — let alone the upcoming V3 superchargers — roadtripping in a Tesla Model 3 is very much possible (and very popular).  But what about other EVs?

While planned production volumes are thusfar disappointingly small, the Hyundai Kona EV is perhaps the most exciting of the non-Tesla “long-range budget EVs” to hit the market this year. Maxing out at around 70kW on a high-power CCS charger and with an EPA combined range of 258 miles, it’s the closest non-Tesla competitor fielded thusfar. Indeed a Kona recently beat a Tesla in a long-distance race — albeit, that Tesla was a (huge, guzzling) Model X with a crippled battery pack. Even this, however, was a feat that no budget EV could before boast.

Nonetheless, 70kW is a far cry from ~116-117kW — hobbled further by a stairstep-style taper and about 14% worse highway fuel economy than a Model 3 LR RWD Aero. Overall, the former will have to charge about 50% longer at each stop vs. the latter.

The additional problem is the premise of this section. The fact is that in the US, high power (>50kW) CCS stations are unfortunately quite rare and unevenly spread at this point (they’re more common in the EU, but still not very common). Obviously, you can only take a road trip on high-power CCS stations if they exist.  CCS infrastructure in general is also somewhat of a mess, with poor reliability, few stalls per charging site, and a mishmash of networks with different payment systems.  The upcoming Volkswagen network (Electrify America) will slowly improve the situation over the next few years, but even the proposed plans compare poorly to where Tesla’s Supercharger network stands today, let alone where it will be several years from now (the upcoming Ionity CCS network in Europe compares much more favourably).

If your charging powers are low, your best way to deal with it is efficiency — and that’s the name of the game for the Hyundai Ioniq, the most efficient EV in the US in city and combined cycle driving (highway energy consumption is 101% that of the Model 3).  Like the Kona, it’s only available in small volumes, and unlike the Kona, it’s quite short range (124 miles combined cycle). But through lightness and streamlining it gains a several percent advantage over the larger Model 3 LR RWD Aero on the highway, and an even greater advantage in city driving.

Low power CCS stations are rather common in the US, although subject to the constraints described above.  On high power stations, the Ioniq actually hits similar powers to the Kona, but the short range means you have to stop more often and detour more frequently. On low-power stations, the Ioniq’s charging power tops out in the 40s. One should budget 2 to 2 ½ times more charging time in this situation

The Nissan Leaf has never been a spectacular performer — one of the worst highway EV efficiencies in its class, 1,23x worse than the Model 3 LR RWD Aero, and limited to CHAdeMO powers (low to mid 40s kW).

The 2018 Leaf came with an extra, unwelcome surprise for those who wished to use it for more than local driving: #Rapidgate. Like its predecessors, it has no active cooling of its battery, but the new larger battery in the 2018 Leaf faces increasing heat buildup relative to the earlier versions. This causes max charging powers to become throttled to 20-25kW relatively soon in a roadtrip. A 2018 Leaf will spend nearly as much time charging as it does driving once #Rapidgate overheating kicks in.

The new Nissan Leaf E-Plus was supposed to eliminate this problem, along with a whole host of other issues. Unfortunately, its launch has been postponed for an unknown length of time, ostensibly due to the Ghosn debacle.

All this said: it’s still a fine car, so long as you don’t need to go much beyond its base range.

The short of it?

EVs absolutely can road trip. Quite well. In a comfortable and relaxing manner. But you have to pick the right one for your needs.