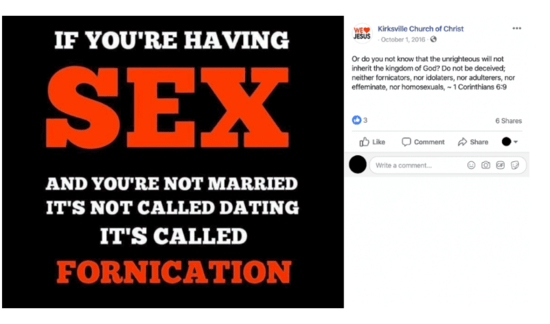 Barry Poyner, an elder with the Kirksville Church of Christ in Kirksville, Missouri, has been arrested for soliciting sex from male college students. And offering to pay with an Arby’s card — which, frankly, is the most appalling part of this story.

Documents state the Truman State University Police Department received a tip that Poyner has been “harassing male Truman students for sexual contact as well as offering to pay for items for sexual favors by using the app Grindr.”

The Kirksville Police Department set up an undercover profile and was soon contacted by a user that went by the handle, “DILF.” “DILF” told the undercover officer that he “would love to have a sugar daddy relationship” and that in previous relationships he provided gift cards, clothing and money to his partners.

“DILF” reached out to the undercover officer on Dec. 3 and asked for sexual favors in exchange for providing fuel for the officer’s vehicle and also that he “might throw in an Arby’s card LOL.”

I don’t know exactly what “DILF” stands for, but I can only assume it’s “Dumbass-Who-Pays-for-Sex-With-Arby’s-cards I’d Like to Fist.”

And what a horrible, horrible way to telegraph to your prospective partners that you have the meats.

Of course — and this really is de rigueur at this point — Poyner’s church is on record as saying sex between men is super, super naughty:

(32699)
$348.00 (as of May 15, 2022 19:05 GMT -04:00 - More infoProduct prices and availability are accurate as of the date/time indicated and are subject to change. Any price and availability information displayed on [relevant Amazon Site(s), as applicable] at the time of purchase will apply to the purchase of this product.)