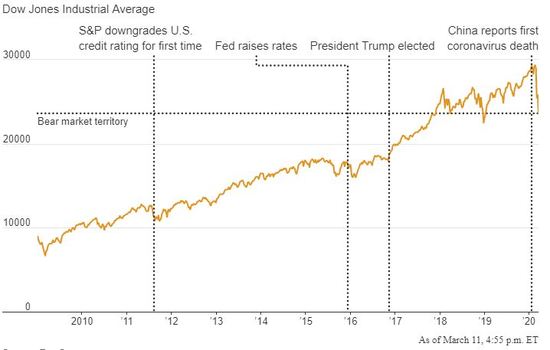 The Obama Bull Market seems now ready to end because of the Trump regime’s incompetence.

We have touched an intraday 20% decline in the S&P 500 that many associate with bear market territory.  We also hit a bear market on the Dow Jones Industrial Average at Wednesday’s close. Typical metrics for a market bottom do not apply in this very unusual situation spawned by the novel coronavirus pandemic.

First off, internal indications of oversold conditions are not reliable in these kind of extreme events.  For example, we have had two days this week where 90% of the volume has been on the downside — an exceptionally rare occurrence that has usually indicated a selling climax, and a market bottom.  Except this is that rare event, that black swan, that traders have come to believe may be an exception to the rule.  Another example: The CBOE Volatility Index, or VIX,  over 50  on an intraday basis for the last four days, is also exceedingly rare.  The last time anything close to this happened was at the tail end of the financial crisis, when the VIX remained over 50 for nearly two months between October and December 2008.

Second, earnings are impossible to determine.  How many times in the last few days have you heard the phrases “stocks are cheap” and “this is a buying opportunity?”  Maybe, but this only has meaning if we have some sense of what earnings will be over the next couple quarters.  We don’t.

So what rules of thumb might work for a trading range?   Traders are increasingly looking at recession ranges for the markets.  The S&P will typically see a drawdown of roughly 13% from high to low in a typical year, but in recession conditions — which are now actively under consideration by some — the S&P will typically drop 30% or more, implying another 10% downside to the markets.

Is this a reasonable assessment, or should we consider greater extremes — like the great recession, which produced a decline of 50% in the S&P from peak to trough?

Trump said last week, six weeks after the first confirmed case, “We got hit with the virus really three weeks ago, if you think about it, I guess.”

Hey @realDonaldTrump , yet another milestone during your Presidency:

1) You are Impeached
2) The DOW 's Bull run from 2009 is OVER, we are in BEAR market now
3) Obama started the Bull Run and you ended it #ByeByeTrump

Coronavirus tests by the US government and other scientists “found that viable virus could be detected up to three hours later in the air, up to four hours on copper, up to 24 hours on cardboard and up to two to three days on plastic and stainless steel.Ã¢Â€Â https://t.co/vaSbQVWZW7

(43291)
$0.00 (as of May 22, 2022 07:01 GMT -04:00 - More infoProduct prices and availability are accurate as of the date/time indicated and are subject to change. Any price and availability information displayed on [relevant Amazon Site(s), as applicable] at the time of purchase will apply to the purchase of this product.)