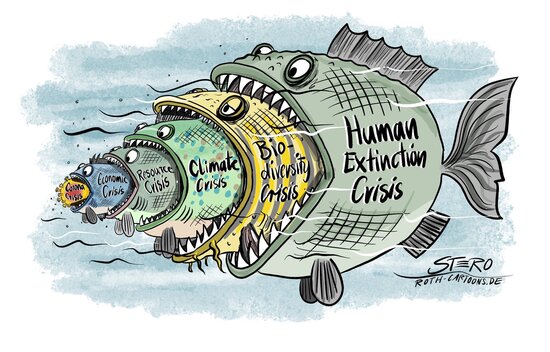 “In all things of nature, there is something of the marvelous.” ~ Aristotle

It is a fact that the biggest threat to our species is not climate change, though it will likely end much of what we experience today, but rather our war on bio-diversity.

Bio-diversity is under attack from a swelling human population that consumes more than what Earth can replace, Very little of the natural world remains, falling victim to agriculture, our cacophony of noise, plastics, fossil fuel waste, insecticides, and other pollutants, radioactivity, outside electric lighting. human greed, invasive species, and of course, climate change.

Amanda Gorman, who received international acclaim with her poem “The Hill We Climb” at the inauguration of Joe Biden and Kamala Harris, works her magic on why we need to act now in her clarion call to prevent climate calamity that can be seen in the video at the bottom of the story.

Peter Brannen writes an incredible piece in The Atlantic on how climate change is not only godawful right now, but he describes a past in vivid detail about what the history of rocks tells us about how vulnerable we truly are to even the slightest change to the atmosphere. I recommend you read the article in its entirety; the research and links are remarkable.

Below are some excerpts:

We live on a wild planet, a wobbly, erupting, ocean-sloshed orb that careens around a giant thermonuclear explosion in the void. Big rocks whiz by overhead, and here on the Earth’s surface, whole continents crash together, rip apart, and occasionally turn inside out, killing nearly everything. Our planet is fickle. When the unseen tug of celestial bodies points Earth toward a new North Star, for instance, the shift in sunlight can dry up the Sahara, or fill it with hippopotamuses. Of more immediate interest today, a variation in the composition of the Earth’s atmosphere of as little as 0.1 percent has meant the difference between sweltering Arctic rainforests and a half-mile of ice atop Boston. That negligible wisp of the air is carbon dioxide.

Since about the time of the American Civil War, CO2’s crucial role in warming the planet has been well understood. And not just based on mathematical models: The planet has run many experiments with different levels of atmospheric CO2. At some points in the Earth’s history, lots of CO2 has vented from the crust and leaped from the seas, and the planet has gotten warm. At others, lots of CO2 has been hidden away in the rocks and in the ocean’s depths, and the planet has gotten cold. The sea level, meanwhile, has tried to keep up—rising and falling over the ages, with coastlines racing out across the continental shelf, only to be drawn back in again. During the entire half-billion-year Phanerozoic eon of animal life, CO2 has been the primary driver of the Earth’s climate. And sometimes, when the planet has issued a truly titanic slug of CO2 into the atmosphere, things have gone horribly wrong.

Today, humans are injecting CO2 into the atmosphere at one of the fastest rates ever over this entire, near-eternal span. When hucksters tell you that the climate is always changing, they’re right, but that’s not the good news they think it is. “The climate system is an angry beast,” the late Columbia climate scientist Wally Broecker was fond of saying, “and we are poking it with sticks.”

The beast has only just begun to snarl. All of recorded human history—at only a few thousand years, a mere eyeblink in geologic time—has played out in perhaps the most stable climate window of the past 650,000 years. We have been shielded from the climate’s violence by our short civilizational memory, and our remarkably good fortune. But humanity’s ongoing chemistry experiment on our planet could push the climate well beyond those slim historical parameters, into a state it hasn’t seen in tens of millions of years, a world for which Homo sapiens did not evolve.

When there’s been as much carbon dioxide in the air as there already is today—not to mention how much there’s likely to be in 50 or 100 years—the world has been much, much warmer, with seas 70 feet higher than they are today. Why? The planet today is not yet in equilibrium with the warped atmosphere that industrial civilization has so recently created. If CO2 stays at its current levels, much less steadily increases, it will take centuries—even millennia—for the planet to fully find its new footing. The transition will be punishing in the near term and the long term, and when it’s over, Earth will look far different from the one that nursed humanity. This is the grim lesson of paleoclimatology: The planet seems to respond far more aggressively to small provocations than it’s been projected to by many of our models.

“In other words,” say 17 of the world’s leading ecologists in a stark new perspective on our place in life and time, “humanity is running an ecological Ponzi scheme in which society robs nature and future generations to pay for boosting incomes in the short term.” Their starkly titled article, “Underestimating the Challenges of Avoiding a Ghastly Future,” reads less as an argument than as a rain of asteroids encountered in the course of flying blind on a lethal trajectory. The authors’ stated goal is not to dispirit readers. “Ours is not a call to surrender,” they write, “we aim to provide leaders with a realistic ‘cold shower’ of the state of the planet that is essential for planning to avoid a ghastly future.”

Put on your shower cap and step into the cold. Humans have altered about 70 percent of Earth’s land surface and ocean. Wetlands have lost 85 percent of their natural area; kelp forests have lost 40 percent; seagrass meadows are disappearing at 1 percent per year; the ocean’s large predatory fish are two-thirds gone; coral reefs have lost half their living mass. Agriculture has halved the weight of living vegetation on land, driving a diversity loss of 20 percent; 40 percent of extant plants are currently endangered. Farmed animals and humans now constitute 96 percent of all land vertebrates; only around 5 percent are wild, free-living animals. The world’s wild populations of birds, mammals, fishes, reptiles, and amphibians have declined by an average of nearly 70 percent in just the last 50 years, a breathtaking plummet. More than 700 vertebrate species have gone extinct over the last 500 years, an extinction rate 15 times the natural rate. Around a million species are now threatened with total extinction. These disruptions and declines have caused the deterioration of soil, air, and water quality; pollination; carbon sequestration; and human health. Other things have increased: floods, fires, the number of malnourished people, plastic pollution, general toxification, and infectious epidemics.

By 2100, billions of people are at risk of facing more flooding, higher temperatures & less food & water

Climate change will cause the position of Earth's tropical rain belt to move in 2 longitudinal sectors that cover almost 2/3 of the globehttps://t.co/fOQ6EV2OB5

Referring to the loss of living diversity and abundance, the authors note: “The mainstream is having difficulty grasping the magnitude of this loss, despite the steady erosion of the fabric of human civilization.” But I think the problem is that the fabric of human civilization has been built and fueled precisely by causing erosion of the living world. The pain of other living things is seldom humanly felt, their interests seldom considered, their intrinsic values discounted. (I am still asked “why we should care” about whether even iconic creatures such as right whales, for example, vanish forever.)

Worth noting is that the authors are overwhelmingly ecologists. As am I. This may account for their perceiving a grim future versus the rosy future offered by techno-optimists. Ecologists understand the world as interdependent relationships among diverse living and non-living systems. Ecologists examine feedbacks that result from, and make possible, the continuity and wondrous proliferation of life. Optimists tend to point to key human social trends such as rates of hunger and poverty. (The number of malnourished declined from 1 billion in 1990 to 800 million in 2017, a rate some well-nourished optimists feel good about. And while poverty rates also declined, population growth resulted in more extremely poor people.)

Vitamin B1 deficiencies are leading to illness and death in animals such as salmon, eels, and moose. Scientists suspect that some unknown process is compromising the very foundation of Earth's food web, writes Alastair Bland. https://t.co/pveCmSttk6

From the study conclusion:

We have summarized predictions of a ghastly future of mass extinction, declining health, and climate-disruption upheavals (including looming massive migrations) and resource conflicts this century. Yet, our goal is not to present a fatalist perspective, because there are many examples of successful interventions to prevent extinctions, restore ecosystems, and encourage more sustainable economic activity at both local and regional scales. Instead, we contend that only a realistic appreciation of the colossal challenges facing the international community might allow it to chart a less-ravaged future. While there have been more recent calls for the scientific community in particular to be more vocal about their warnings to humanity (Ripple et al., 2017; Cavicchioli et al., 2019; Gardner and Wordley, 2019), these have been insufficiently foreboding to match the scale of the crisis. Given the existence of a human “optimism bias” that triggers some to underestimate the severity of a crisis and ignore expert warnings, a good communication strategy must ideally undercut this bias without inducing disproportionate feelings of fear and despair (Pyke, 2017; Van Bavel et al., 2020). It is therefore incumbent on experts in any discipline that deals with the future of the biosphere and human well-being to eschew reticence, avoid sugar-coating the overwhelming challenges ahead and “tell it like it is.” Anything else is misleading at best, or negligent and potentially lethal for the human enterprise at worst.

(51660)
$17.62 (as of May 22, 2022 02:08 GMT -04:00 - More infoProduct prices and availability are accurate as of the date/time indicated and are subject to change. Any price and availability information displayed on [relevant Amazon Site(s), as applicable] at the time of purchase will apply to the purchase of this product.)