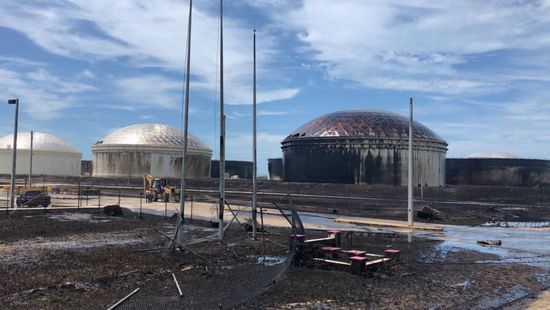 As if the misery of the Bahamian people was not horrifying enough, the apocalyptic winds of Hurricane Dorian have been found to have ripped the roofs off of five storage onshore oil tanks on Grand Bahama Island. The battered island was mauled for 40 hours by the windstorms eyewall.

The tanks are in the South Riding Point oil facility. Equinor, a Norwegian firm, has acknowledged the disaster, but have said that there is no evidence of oil spilling into the ocean. Video from Newsflare contradicts Equinor’s claim writing that “footage shows streaks of oil in the glowing blue sea between the islands of Great Abaco and Nassau”.

The immediate concern is that the oil breach has poisoned the island’s aquifers and that the tanks may ignite.

The Bahamas Press has no information on the team that was left behind to care for the facility during the storm. Bahama Press noted: “ A massive oil breach at Burmah Oil Terminal following the passage of Hurricane Dorian has occurred. Right now STATOIL has a major leak after lids blew off tanks in the 185mph winds that engulfed Grand Bahama island and lasted for some three long days”.

Hurricane Dorian’s devastation has killed at least 30 in the Bahamas. All this death has a distinct smell, Sam Teicher told Earther. The founder of Coral Vita, a coral-growing operation based Grand Bahama, had that awful, hair-raising stench in his nose all day on Thursday as he drove around trying to help those in need. Only one other odor was able to distract Teicher from the lingering odor of death: oil.

Hurricane Dorian left the Equinor South Riding Point oil facility in High Rock, which sits on the island’s southern coast, in shambles. The hurricane struck the Bahamas as a Category 5 storm with winds of 185 mph. That wind—as well as the rain and storm surge—caused major infrastructure damage across the island, and the oil facility wasn’t spared. The hurricane damaged the terminal’s onshore tanks leading to an oil spill, according to a Thursday update from Norway-based Equinor. The company hasn’t confirmed whether any oil has made it out to sea, but the oil is seemingly everywhere on the land closest to the facility.

Teicher and his colleagues documented all this damage and posted a video to Twitter. Equinor is mobilizing a cleanup team to the island “as soon as possible,” according to its release. Poor road conditions and continued flooding are complicating its efforts. Earther has reached out to the company for details and will update if we hear back.

The main concern whenever an oil spill happens is environmental contamination. Petroleum is toxic, and water is limited on Grand Bahama. The population is almost entirely dependent on its aquifers to supply drinking water, and the water table on these islands is usually near the land surface. If oil reaches the groundwater, it’ll spell trouble for the many communities that depend on it.

A Norwegian owned oil storage facility on Grand Bahama was damaged during Hurricane Dorian and has caused a 'catastrophic' oil spill, as reported by Bahamas Press.

The tops of five crude-storage tanks were torn off by hurricane winds gusting at speeds up to 295 km/h. A video from Coral Vita, an environmental agency, was posted online showing spilled oil on the ground near the shoreline. Coral Vita has called this oil spill “absolutely catastrophic” and is concerned that the oil spill could result in a fire.

Equinor, Norway's state-owned energy company that owns the oil storage facility, released a statement saying that they have conducted an aerial assessment of the site and found that the facility has sustained damage and oil has spilled, but say it is too early to quantify the volume of spilled oil.

Equinor says that the tough road conditions and flooding caused by the hurricane have impacted their ability to assess the situation and the scope of damages to the terminal and the surroundings.

The facility holds 6.75 million barrels of crude oil and will remain shut down until further notice. On Friday Equinor stated that it is too early to estimate when the response to the oil spill will take place and it does not currently see any indications that the oil has spilled out to the ocean.

Absolutely CATASTROPHIC #oilspill in #GrandBahama from #HurricaneDorian at the #Statoil / @Equinor facility. Teams need to be here TODAY to a) prevent a fire from starting (oil across the highway where people are trying to help) b) stop any/all spillage to ocean and c) clean up pic.twitter.com/8u3e2BDYdY

No word on who is going to clean up this mess, but it is past time that the fossil fuel industry is held responsible for climate crisis disasters.

The urgency of evacuating Grand Bahama and Abaco has become even more evident.