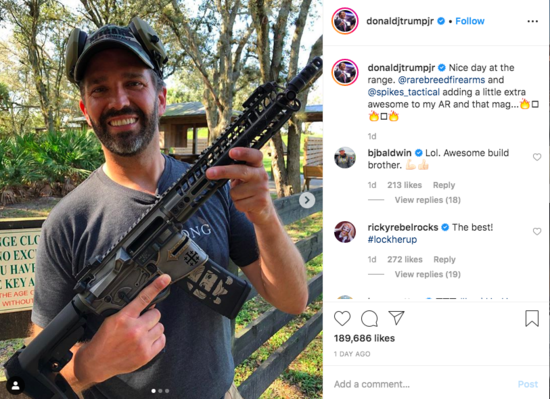 There’s something seriously wrong with this kid.

At least he was at “the range” and not firing from an armored Humvee at narcoleptic mountain gorillas or something.

In a provocative stupid-as-shit Instagram post on Sunday, Donald Trump Jr. was shown posing with an AR-15 featuring a cartoon drawing of Hillary Clinton in prison:

The gun also features a “Crusader Cross,” which is exactly the kind of thing that’s sure to calm a now-boiling-over Middle East.

The Jerusalem Cross or Crusader Cross was the symbol of the the Latin Kingdom of Jerusalem, a crusader state established in the 11th century after Jerusalem was seized from its then-Muslim rulers.

Of course, Hillary is not in prison, and she almost certainly never will be. Donald Trump Sr., on the other hand, obstructed justice numerous times (per the Mueller report) and is an unindicted co-conspirator in a felony.

And, for the record, if Hillary were president right now, we wouldn’t be on the precipice of war with Iran.

So there’s that, too.

But, well, Donald Trump Jr. knows his audience — and while he knows very little, he knows they don’t know anything. So I’m sure this post will be a big hit.

(51660)
$17.62 (as of May 22, 2022 02:44 GMT -04:00 - More infoProduct prices and availability are accurate as of the date/time indicated and are subject to change. Any price and availability information displayed on [relevant Amazon Site(s), as applicable] at the time of purchase will apply to the purchase of this product.)