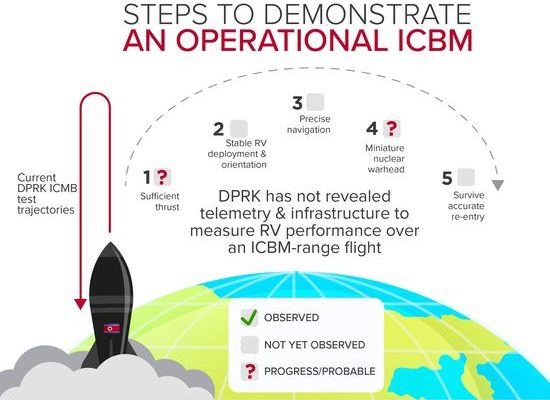 Regardless, the North Koreans continue the work on ICBMs with nuclear capacity unabated by the coddling of Individual-1.

What exactly constitutes a “source familiar with the North Korean leadership's current mindset”? Did they plant a chip in Kim Jong Un's brain?https://t.co/fuIb8tPz3j

No position showing – currently showing on a receiver in Japan.

Despite recent speculation that North KoreaÃ¢Â€Â™s Ã¢Â€ÂœChristmas giftÃ¢Â€Â might be a satellite launch, commercial satellite imagery of #DPRKÃ¢Â€Â™s Sohae Satellite Launching Station over the past two months shows no indication of such preparations. https://t.co/V1oUO6Ps25

Relations between Kim and Trump became cozier in 2018 after Kim initiated diplomacy that led to their first summit in June that year in Singapore, where they issued a vague statement on a nuclear-free Korean Peninsula, without describing when or how it would occur.

But negotiations faltered after the United States rejected North Korean demands for broad sanctions relief in exchange for a partial surrender of the North’s nuclear capabilities at Kim’s second summit with Trump in Vietnam in February.

Trump and Kim met for a third time in June at the border between North and South Korea and agreed to resume talks. But an October working-level meeting in Sweden broke down over what the North Koreans described as the Americans’ “old stance and attitude.”

Kim, who unilaterally suspended nuclear and intercontinental ballistic missile tests last year during talks with Washington and Seoul, has said North Korea could seek a “new path” if the United States persists with sanctions and pressure against the North.

North Korea has also conducted 13 rounds of ballistic missile and rocket artillery tests since May, and has hinted at lifting its moratorium on nuclear and long-range missile tests if the Trump administration fails to make substantial concessions before the new year.

Preparing to understand North Korea's Xmas non-surprise. How close is DPRK to an operational ICBM, and will a launch punctuate Kim's final rejection of denuking diplomacy?https://t.co/EE2tTup22H

With Christmas less than a week away, a great gift for a friend or loved one is #TimeToGetTough. It will be the best present you give!

Despite urging from China, Democratic Peoples Republic of Korea will not investigate Hunter Biden. https://t.co/PyplpUNEN2

(198026)
(as of May 17, 2022 03:30 GMT -04:00 - More infoProduct prices and availability are accurate as of the date/time indicated and are subject to change. Any price and availability information displayed on [relevant Amazon Site(s), as applicable] at the time of purchase will apply to the purchase of this product.)