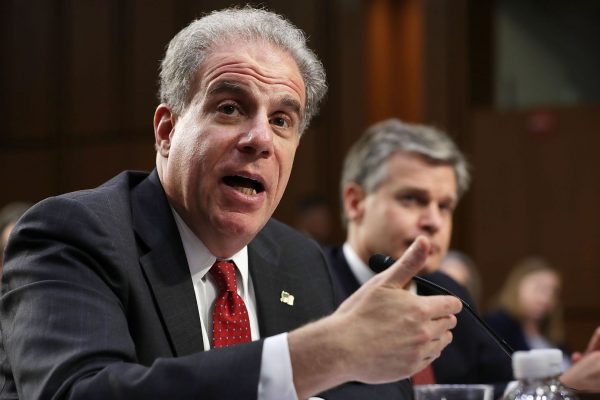 Did we really want a criminal in the WH. The DoJ IG report is available.

BREAKING: US Justice Dept. inspector general report on Russia investigation: Overall investigation was justified and not politically motivated; FBI mishandled parts of its application to monitor a Trump campaign aide.https://t.co/grwkPSZKV2

Inspector general found that political bias did not taint the actions of former FBI leaders who have frequently been the subject of presidential attacks on Twitter, including former Director Comey, former Deputy Director McCabe and former Deputy Assistant Director Strzok.
At the same time, the IG report found errors — and in at least one case, alleged document tampering by a low-level FBI lawyer.
BREAKING: Due to problems with FBI’s applications to national security court to conduct secret surveillance on Trump aide, inspector general is launching separate inquiry into how FBI obtains national security warrants to eavesdrop on American citizens.

DOJ report finds Russia probe was justified, not biased against Trump
IG report also recommends that new guidelines be established for investigations into presidential campaigns.
IG report: Surveillance of Page, which began in Oct. 2016, did not spark FBI Russia investigation, which began in July 2016 after Australian diplomat reported that different Trump aide learned from a Russian agent that Russian government possessed thousands of Democrat emails.

AG Barr on IG report’s findings: “The Inspector General’s report now makes clear that the FBI launched an intrusive investigation of a U.S. presidential campaign on the thinnest of suspicions that, in my view, were insufficient to justify the steps taken.”

US Attorney Durham: “Based on the evidence collected to date, and while our investigation is ongoing, last month we advised the Inspector General that we do not agree with some of the report’s conclusions as to predication and how the FBI case was opened.”

Has Trump … read the report? Or even seen any of the coverage of it? Because it's pretty much the exact opposite of how he just described it. https://t.co/Sr1Gjqk24J https://t.co/nA3IFZAQVN

This investigation debunks 2+ years of conspiracy theories about the origins of the Russia investigation. It also shows that Trump wrongly smeared the reputations of many career govt officials, including Andrew McCabe, Peter Strzok, and Lisa Page.https://t.co/rLcPBWX2wk

Career officials may hesitate to make tough, but necessary, calls, knowing that political winds could one day put a target on their backs. Disgraceful. https://t.co/5MWHTgQanw

We should be deeply concerned by this report — but not for what it says (crucially that political bias played no role in investigative decisions). What's concerning are the lengths the administration is resorting to in order to undermine it.

They won't take "no" for an answer. https://t.co/ANSDE7mtWe

This is more fascinating:

Ivanka Trump invited dossier author Chris Steele to Trump Tower in New York in 2010 to discuss the possibility of the former British intelligence officer working for the Trump Organization in doing due diligence on their business interests abroad as part of his work at Orbis.

NEW: The Trump “family member” referenced in the #IGReport who had a friendship w/ Christopher Steele was Ivanka, per @ABC. She met him in 2007, when he was still working for MI6, to discuss working for the Trump Org.