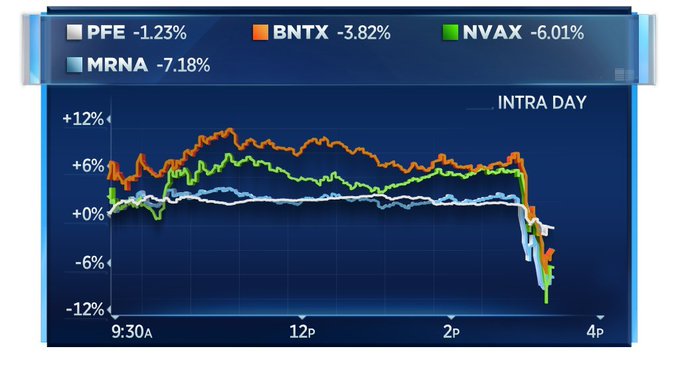 There is a capitalist propaganda battle at work, with the Wall Street Journal claiming that “ Biden has sent a signal around the world that nobody’s intellectual property is safe in America.”. The National Review now claims that “Profit Margins Save Lives”.

The real questions remain about global public health and the continuing series of pandemics and their treatment, because unfortunately, corporate profit still comes before people. And Republicans are objectively unhappy that fewer people are dying of COVID.

The economic self-damage is also hard to fathom. The U.S. currently has a competitive advantage in biotech and biologics manufacturing, which could be a growing export industry. Waiving IP protections for Covid vaccines and medicines will give away America’s crown pharmaceutical jewels and make the U.S. and world more reliant on India and China for pharmaceuticals.

Moderna has been working on mRNA vaccines for a decade. Covid represents its first success. Ditto for Novavax, which has been at it for three decades. Small biotech companies in the U.S. have been studying how to create vaccines using nasal sprays, pills and patches.

Thanks to Mr. Biden, all this could become the property of foreign governments. Licensing agreements allow developers to share their IP while maintaining quality control. Breaking patents and forcing tech transfers will enable China and low-income countries to manufacture U.S. biotech products on their own.

From @WSJopinion: President Biden’s endorsement of a Covid vaccine and drug patent waiver destroys tens of billions of dollars in U.S. intellectual property and surrenders America’s advantage in biotech https://t.co/el0xQoD1yp

Pfizer and BioNTech this week said they aimed to deliver three billion doses this year, up from last summer’s 1.2 billion estimate. Moderna increased its supply forecast for this year to between 800 million and a billion from 600 million. AstraZeneca says it has built a supply network with 25 manufacturing organizations in 15 countries to produce three billion doses this year.

AstraZeneca and Novavax have leaned heavily on manufacturers in India to produce billions of doses reserved for lower-income countries. But India has restricted vaccine exports to supply its own population. IP simply isn’t restraining vaccine production.

Busting patents also won’t speed up production, since it would take months for these countries to set up new facilities. Competition will increase for scarce ingredients, and less efficient manufacturers with little expertise would make it harder for licensed partners to produce vaccines.

.@NickKristof: “[T]his is not an expense but an investment: Our ability to compete with China will depend less on our military budget, our spy satellites or our intellectual property protections than on our high school and college graduation rates.”https://t.co/5Px5wUT9Ne

Many European chip-producing businesses that rely on American intellectual property are accusing the US of using its sanctions regime to shut them out of China's market https://t.co/vfcrNs1lnI pic.twitter.com/PLwY3Oz96S

In this context there should be attention paid to the new work on Intellectual Property & Monopoly Capitalism with Cecilia Rikap. “Cecilia Rikap's book on Capitalism, Power and Innovation presents frontier research on the nature and formation of intellectual monopoly capitalism and its impact of the peripheries. It is a must read for scholars and policy makers.”

Intellectual monopolies are not only–nor mainly–a result of giant corporations’ in-house R&D. Their knowledge monopoly is based on appropriating and monetizing knowledge results from their multiple innovation networks organized as modularized knowledge steps in charge of different organizations (from start-ups to public research organizations and universities). Intellectual monopolies also outsource innovation steps by actively engaging in open access or open science initiatives (including open-source software in the case of tech giants), monetizing knowledge commons.

In this context, what is the fate of the rest of the firms–which are the overwhelming majority of the industrial landscape–and how do they manage to remain profitable while subordinating to intellectual monopolies? How are science and technology transformed in this context? What are the implications for research universities and other public research organizations? What is the place of the peripheries as profits concentrate in a handful of corporations from core countries? What is the role played by those core countries’ states in the emergence and spread of intellectual monopoly?

The persistently uneven distribution of innovation in the world is a structural truth worsened by intellectual monopoly capitalism. Intellectual monopolies originate in core countries, in particular in the United States, but their effects are spread all over the world. In my book “Capitalism, Power and Innovation: Intellectual Monopoly Capitalism Uncovered” I study intellectual monopoly capitalism integrating three levels of analysis: global, national, and network. At the national level, it distinguishes between core and peripheral countries. At the network level, it focuses on how intellectual monopolies plan, organize and predate from their innovation networks, thus also including a broad set of subordinate firms, universities, and public research organizations from all over the world.

In the peripheries, intellectual monopolies systematically pass over–less powerful–states. Part 3 begins with an assessment of innovation and upgrading policies for development under intellectual monopoly capitalism. In this context, innovation studies (including the idea of an entrepreneurial state), as well as GVC and catching-up approaches, have shortcomings in providing viable policy recommendations. Peripheral countries’ specific traits result in a greater technological gap with (intellectual monopolies and their innovation networks from) core countries and reinforce underdevelopment. However, the relatively more developed countries within the peripheries exhibit an unbalanced knowledge and innovation structure with their leading research institutions integrated into global knowledge networks, thus risking being subordinated to intellectual monopolies, while local firms generally lag behind.

“The monopoly price of healthcare itself — embedded rents on 'intellectual property,' licensing, and bureaucratic overhead — that’s the problem in the first place.” – Kevin Carsonhttps://t.co/7YiOtWUq8n