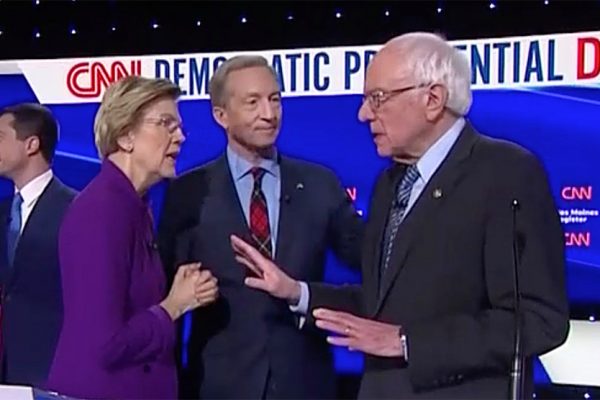 After the debate ended it seemed as if Bernie Sanders extended his hand to shake Elizabeth Warren’s hand. It seemed as if she drew it back.

I found this Democratic Debate completely uninteresting. There was no real news other than Elizabeth Warren now unable to utter the word Medicare for All. Even as she is my second choice it concerns me because I think it will make her seem calculating.

During the Democratic Debate, Bernie Sanders was asked specifically if he told Elizabeth Warren that a woman could not win. He denied it categorically.

“Well, as a matter of fact, I didn’t say it,” Bernie Sanders said. “And I don’t want to waste a whole lot of time on this, because this is what Donald Trump and maybe some of the media want. Anybody knows me knows that it’s incomprehensible that I would think that a woman cannot be president of the United States. Go to YouTube today. There’s a video of me 30 years ago talking about how a woman could become president of the United States. In 2015, I deferred, in fact, to Sen. Warren. There was a movement to draft Sen. Warren to run for president. And you know what, I said — stayed back. Sen. Warren decided not to run, and I then — I did run afterwards. Hillary Clinton won the popular vote by 3 million votes. How could anybody in a million years not believe that a woman could become president of the United States? And let me be very clear. If any of the women on this stage or any of the men on this stage win the nomination, I hope that’s not the case, I hope it’s me. But if they do, I will do everything in my power to make sure that they are elected in order to defeat the most dangerous president in the history of our country.”

Elizabeth Warren’s answer surprised me because I had expected her to say something like, ‘It happened. Bernie probably either forgot or did not realize he said it.’ That would have closed the event in a manner that allows shallow media to move on given that she said she did not want to concentrate on this issue. Instead, we got,

“I disagreed,” Elizabeth Warren said. “Bernie is my friend, and I am not here to try to fight with Bernie. But, look, this question about whether or not a woman can be president has been raised, and it’s time for us to attack it head-on. And I think the best way to talk about who can win is by looking at people’s winning record. So, can a woman beat Donald Trump? Look at the men on this stage. Collectively, they have lost 10 elections. The only people on this stage who have won every single election that they’ve been in are the women… Amy and me.”

That said, her message about women was and is empowering. I wish she had used that great line elsewhere.

(51660)
$17.62 (as of May 21, 2022 22:20 GMT -04:00 - More infoProduct prices and availability are accurate as of the date/time indicated and are subject to change. Any price and availability information displayed on [relevant Amazon Site(s), as applicable] at the time of purchase will apply to the purchase of this product.)