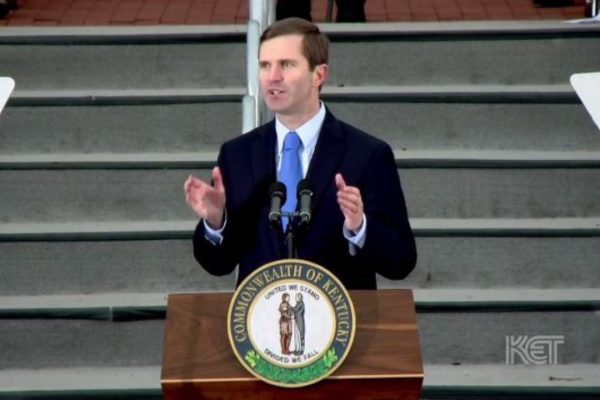 Once again, newly elected Democratic Kentucky Governor Andy Beshear has kept another campaign promise: signing an executive order that ended Matt Bevin’s “work requirements” for Medicaid.  For those not in the know, Republican Governor Matt Bevin hated, hated, hated the ACA and the Medicaid expansion under then Democratic Governor Steve Beshear — Andy’s Dad.  Bevin came up with a punitive plan for those who could sign up for Medicaid under the ACA.  Bevin changed the Medicaid program so that “able bodied” adults had to get a job or volunteer twenty hours a week to qualify for Medicaid.  This changed would have thrown 95,000 Kentuckians off their health insurance.

The supposed “overhaul” of the state Medicaid program was tied up in the courts.

And Monday, Beshear pulled the plug on changes to Medicaid that Bevin had sought to enact after winning approval from the Trump administration. Bevin had been temporarily blocked thus far by adverse federal court rulings that his administration has appealed.

Beshear said his lawyers will ask the court to drop Kentucky from any further legal challenges seeking approval to enact Bevin’s plan.

A challenge to Bevin’s plan and a similar plan enacted by Arkansas is pending before the U.S. Court of Appeals for the District of Columbia. A federal appeals panel heard arguments on the case in October but has not yet ruled.

If throwing 95,000 Kentuckians off their health insurance wasn’t enough for the cruel Bevin, he had this Trumpian move already in the safe:

Beshear’s action also preserves the Medicaid expansion authorized by the Affordable Care Act and enacted by his father, former Gov. Steve Beshear, under his executive authority. Bevin issued an executive order last year that would revoke the entire expansion that added health coverage for about 480,000 Kentuckians, should a final court decision strike down Bevin’s Medicaid plan.

Kind of amazing that Kentuckians seem to approve of a government run health insurance program.  And two moderate Democrats embraced this move — Steve and Andy Beshear.  I was covered under the Medicaid expansion, and it was the BEST health insurance I ever had.  Oh, and I was working for a shitty employer who didn’t give me any benefits.  And I had plenty of private plans in the past which sucked in comparison to Medicaid.

Yes, I’m making an obvious criticism about those centrists who tout the joys of “choice” when it comes to private health insurance.