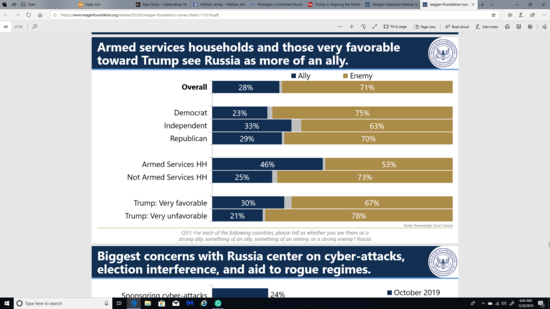 “People’s beliefs and perceptions are shaped more by whatever the leaders of their own political tribe say than by ideology, history, or even their own self-interest,” Paul Pillar, former senior CIA analyst.

Putin can take over the world and Donald Trump will help him spread his propaganda wow ! I love to no what Trump and Putin talking about
Like to see the Republicans defend that unbelievable ! Mitch McConnell ignoring all the bills setting on his desk vote please pic.twitter.com/6u21eFzGh4

The Reagan National Defense Foundation and Institute released polling results on the publics view of foreign policy, defense and, national security matters. The results were released by the foundation in October and has a lot of interesting data on perception of defense issues.

One of those is a rising sympathy for Russia by US troops. The poll found 46% view Russia favorably, primarily because of Trump talking points. Americans as a whole support for Russia is at 28% (which is way to high). Why do Republicans hate America?

WASHINGTON – Russian efforts to weaken the West through a relentless campaign of information warfare may be starting to pay off, cracking a key bastion of the U.S. line of defense: the military.

Generally, the pollsters found the positive views of Russia seemed to be “predominantly driven by Republicans who have responded to positive cues from [U.S.] President [Donald] Trump about Russia,” according to an executive summary accompanying the results.

U.S. defense and security officials have told VOA that Russia has been targeting U.S. military personnel, specifically, with a ramped-up influence campaign, as far back as 2017 in preparation for the November 2018 midterm elections.

Russia’s goal, they said, was not so much to swing the result of the elections but to seed U.S. military personnel with the right type of disinformation so that they would be predisposed to view Russia and its actions in a more favorable way in the future.

“We know it goes on,” said Ed Wilson, then deputy assistant secretary of defense for cyber policy, said at the time. “That’s why we’ve amped up and increased the attention that we’re paying.”

Countering Russia’s efforts, both against the U.S. military and American society at large, has not been easy, according to both analysts and former officials, because of the political climate and the rhetoric coming from the White House.

The Washington Monthly writes: Trump Is Aligning the Military with the Russian White Supremacist Criminal Syndicate

It’s easy to sound the alarm over this for basic national security reasons. From a traditional Westphalian perspective, it is clearly dangerous for the people we entrust to secure the country’s self-defense to be much more favorable to our fiercest geopolitical foe than the public. It should be the other way around. It is beyond alarming when put in the proper context: one of the country’s two major political parties was just assisted in the previous election by its greatest foe; the president who was elected by a minority of voters with that rival’s help has continued to run interference for that rival, has been weirdly obsequious to its dictatorial leader, has refused to accept his own intelligence services’ findings about the criminal theft of opposition documents in the election, and is to this day extorting and undermining a nation in a hot war with that same rival power in an effort to fabricate dirt on a political rival for the next election and, amazingly, to frame the victim of the extortion for the crimes of its rival aggressor.

The optic of this. So often it seems Trump (and Giuliani) – put the unthinkable in front of is to dull its impact. "All roads lead to Putin." https://t.co/JhZPwGDFob

And now, due to purely partisan interests, the nation’s military is being warped into supporting the hostile foreign power–against our own values, geopolitical interests, and intelligence services It’s like the plot from a bad spy novel, except that it’s happening right out in the open. This is the situation as it stands between Trump, Russia, the Republican Party and Ukraine. And no one can do anything about it because the Republican Party sees itself as locked into a demographic death spiral as it sheds support from every demographic except the declining share older, white, exurban evangelicals, and is therefore willing to defend even the most abominable behavior in exchange for nominating a slew of extremist radical judges who they hope will derail any progressive priorities for the next several decades.

But even this understates the cause for alarm. Because Russia isn’t just a geopolitical foe: it is also the global leader of white supremacy and fossil fuel kleptocracy. It is an international criminal syndicate operating as a government, and it is actively recruiting allies and henchmen all around the world. As I said last year, it’s not so much that the United States lost or is losing the Cold War (we didn’t lose it), as much as that racist plutocrats won it:

The Saudis pay cash, just like Putin, and it's always been the only measure Trump understands–or thinks he understands. https://t.co/1cT3IYQKLt

In order to pacify the populace during this process, Putin and allies used  the standard timeless conservative tactics: they allied themselves with rural and socially conservative religious elements, ramped up hostile rhetoric toward supposedly corrupt outsiders, leveraged racist and sexist sentiments against domestic minorities and women’s rights groups, and portrayed themselves as the only ones who could make Russia great again.

It was unsurprising, then, that a Russian government aligned with racist, sexist and plutocratic principles would find an easy friend in Donald Trump and the American Republican Party. They are natural allies. It is less that America became Russia’s client state, than that the conservative movements in both America and Russia made a semi-secret criminal global compact that neither could acknowledge publicly. Since Trump’s election, their wealthy patriarchal white supremacist movement has sought and encouraged allies in Britain, Europe, Brazil and elsewhere, seeking to align the world against socially inclusive economic progressivism in favor of plutocratic ethnonationalism.