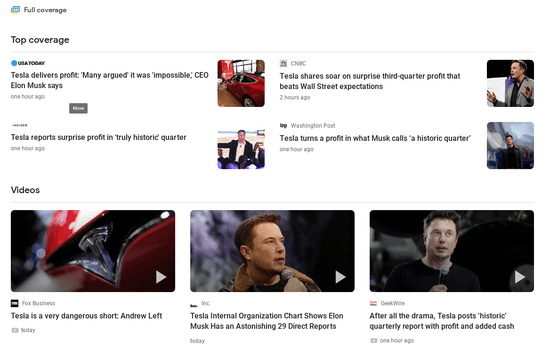 Go on, auto industry, analysts and old-school auto journalists. Tell us how electric cars can’t be profitable today and why we’re stuck with oil for the time being!

*** “I want to be very clear here,” Carlos Tavares, chief executive of PSA, the owner of Peugeot, Citroën and Opel-Vauxhall, told reporters at the show. “We are moving from a technology-neutral era into an instruction to go electric.” He said interventions to get more electric cars on the road are an unwelcome intrusion.

*** “It’s no wonder, therefore, that carmakers have a tough time making a profit on EVs. Reportedly, Fiat loses $20,000 on each model 500e it sells. And according to credit agency Moody’s, overall returns on auto industry investments in EVs are likely to remain elusive until the 2020s.”

*** “ BMW (BMWG.DE) will not mass produce electric cars until 2020 because its current technology is not profitable enough to scale up for volume production, the chief executive said on Thursday.”

*** “In fact, the credit rating agency says that even though they expect sales will see strong growth over the next dozen years, accounting for as much as 17 to 19 percent of the market by 2030, automakers are currently losing about $7,000 to $10,000 per vehicle and they will keep losing some amount on them for the next few years.”

*** “… if they do, they risk blowing billions on unprofitable cars, reports Bloomberg, citing a new study from consulting firm AlixPartners. Automakers will spend $255 billion on 207 electric cars by 2022 but are likely to lose money due to the prohibitive cost of production and fierce competition for sales.”

*** “GM races to build a formula for profitable electric cars — General Motors Co Chief Executive Mary Barra has made a bold promise to investors that the Detroit automaker will make money selling electric cars by 2021. What Barra has not explained in detail is how GM intends to do what, so far, no major automaker has done.”

One could keep going for almost all major manufacturers — the message is the same. “EVs just aren’t profitable yet compared to ICE vehicles. We’ll make them in bulk, profitably, eventually but for now, we have to keep selling ICE vehicles to stay alive, so please keep filling your roads with them. Sorry, that’s just the way it is — we promise it’ll change… eventually…”

And who can argue with them? These are the giants! The experts! It’s almost impossible to compete with the giant automakers; almost everyone who has tried has failed. Pack it in, folks — you can’t make money selling EVs yet.

Wait a second, I’m being handed some news here:

Huh? Tesla is now profitable? Who the heck, Tesla?  This can’t be right; all the big names said you can’t make money on EVs, and they’re the experts!

This must be wrong, let’s see where they’re getting this.  Ah, here we go:

This can’t be right! Oh wait, I know this game!  It’s all just them earning a bunch of ZEV credits!  Haha, sneaky Tesla I caught you… wait, what?

Automotive revenue in Q3 increased by 82% sequentially over Q2, mainly due to a sharp increase in Model 3 deliveries. In Q3, we recorded $52M in ZEV credit sales compared to zero in Q2.

Um… surely there’s something else going on here… minimal increase in accounts payable vs. accounts receivable… inventory levels picture perfect… opex reduced…  having already started construction on the new China gigafactory… guiding to pay back bonds in Q4, already paid$80m+ this quarter… by far most tradeins from $<35k cars, so the market is twice as large as was speculated…. Europe orders starting before the end of the year… already introduced a lower-priced version, going even lower at the start of next year…. customer deposits still at nearly a billion dollars, meaning hundreds of thousands… haven’t started sales outside the US and Canada yet, including the huge EV markets in China, the EU, Norway, etc…. no leases yet (the way most people buy cars)… no advertising… first year production… yet it’s already the number 1 selling car in the US by revenue, #5 by volume…

Had to been done ur welcome pic.twitter.com/7jT0f9lqIS

Your excuse is gone. If a little upstart funded by a Mars-obsessed dotcom entrepreneur can in a decade do what you’ve been telling us is impossible, you have no excuses anymore. Stop making compliance cars that only show up in volume in states that have mandates, but are hard or impossible to find elsewhere. Stop taking part in organizations working to undercut clean air regulations. Stop underfunding your investments in EV tech, fast charging infrastructure, and battery mass production. Don’t want to have to cut your dividend to pay for it? Tough cookies. You can either eat the temporary pain to develop the tech to take part in the future, or you can give up on taking part in the future yourselves.

It’s your choice. The future is electric.  Are you in?

(28)
$19.99 $9.99 (as of May 19, 2022 02:27 GMT -04:00 - More infoProduct prices and availability are accurate as of the date/time indicated and are subject to change. Any price and availability information displayed on [relevant Amazon Site(s), as applicable] at the time of purchase will apply to the purchase of this product.)