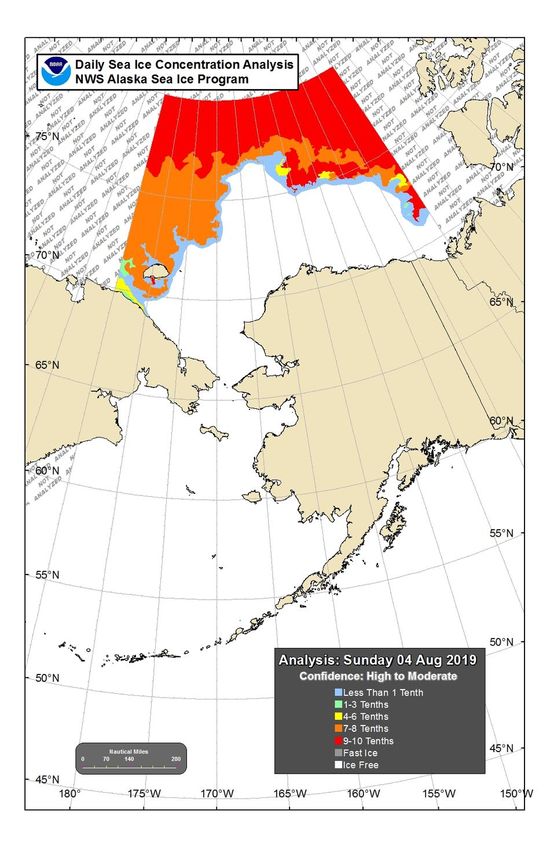 And all those facing outward, towards the planetary, the geologic, the unknown, raised a great cry, a witnessing of the very tide that had been predicted. Homo Colossus did not stir from its dream of currency.  The Greenland Ice Sheet.

All of the sea ice has melted around the Alaskan coast for up to 150 miles. All of it!  The hot summer and the July heatwave is the cause (air temperatures in the high 80’s and low 90’s were common as were sea temperatures above 60F). The dramatic loss is not the first time this phenomenon has occurred —  just two short years ago all of Alaska’s sea ice melted. What is remarkable this year is that the ice has never melted this early before, sea ice should hopefully form in the Fall when temperatures plunge. Even in winter, the ice melted.

In March the Bering, and to a lesser extent the Chuckchi and Barent, Seas were ice-free. What is horrifying is that “new research shows that changes in the heat flow of the northern Pacific Ocean may have a larger effect on the Arctic climate than previously thought.”  The rapid loss of sea ice in the Arctic Ocean is being rapidly funneled out of the Pacific and into the Atlantic via Greenland’s Fram Strait.

Increasing model agreement in another Arctic dipole pattern in the coming week. This circulation favors enhanced sea ice loss with transport from the Pacific to the Atlantic. Stay tuned…

(“The Arctic dipole anomaly is a pressure pattern characterized by high pressure on the arctic regions of North America, and low pressure on the Eurasia region. This pattern sometimes replaces the Arctic oscillation and the North Atlantic Oscillation).

Warming sea temperatures and sea ice loss are wreaking havoc on marine ecosystems in Alaska and Russia. The very web of life in the Arctic is threatened and the leading suspect is abrupt climate change.

The Arctic is warming up to three times faster than anywhere else on Earth due to feedback loops that were not expected for decades. The devastating phenomenon is known as Arctic Amplification and haunts climatologists as more and more evidence surfaces that humanity may be well beyond any effort on our part to control.

Arctic Today reports on the crisis that is washing up on the Bering Sea coastline for all to see. It is a must-read – filled with links that are worth exploring.

The toll of discovered dead animals as of mid-July: 137 ice-dependent seals and five gray whales, according to the National Oceanic and Atmospheric Administration; dozens of walruses, piles of bird carcasses — marking what has become the latest in five consecutive years of bird die-offs in the region; carcasses of salmon that never got the chance to spawn clogging rivers and streams; and in some spots, stretches of dead blue mussels and krill have coated beaches.

Sometimes animals are found alive, but only barely so. A walrus found in June near Solomon, a village 30 miles east of Nome, was so thin that its ribs were visible and so weak its head was down on the ground, according to a local report. “It was having trouble keeping its head out of the mud,” said the report filed with the Local Environmental Observer network operated by the Alaska Native Tribal Health Consortium.

The animal die-offs and strandings, part of a series hitting the Bering Strait region since at least 2016, are sobering, residents say. “To see that many dead whales, it’s weird,” said Adelaine Ahmasuk, who spotted a dead baleen whale of some sort, a dead beluga and a dead bearded seal on a single fishing trip with her family.

If harmful algal blooms happened in the past, the magnitude of current risk is likely unprecedented, said Dean Stockwell, a University of Alaska Fairbanks oceanographer. He fears that the plentiful toxin-producing algae are being swept by currents and storms from southern parts of Alaska to the far north, where waters are now more receptive to blooms. In the past, the region’s people, for all their traditional knowledge, “weren’t dealing with these temperatures,” he said at the workshop. “It’s changing, and that’s what you have to know.”

When there is little or no ice, seals and walruses cannot find platforms to rest in between food-foraging dives and during key life events like birth and nursing of young. More light penetrates the water, boosting phytoplankton blooms and upsetting a prior balance, benefitting fish and pelagic species in the upper reaches of the ocean water but reducing the amount of nutrition that drifts down to the deep-dwelling benthic species like tiny amphipods, clams, crabs and snails that are crucial to the marine-mammal food web.

The absence of a winter freeze also means lack of the usual “cold pool” of ultra-salty, super-chilled water that normally serves as an underwater barrier separating the high-fat, nutrition-dense species in the northern Bering Sea from the lower-fat species that live in the southern part of the sea.

(42773)
$0.00 (as of May 15, 2022 11:02 GMT -04:00 - More infoProduct prices and availability are accurate as of the date/time indicated and are subject to change. Any price and availability information displayed on [relevant Amazon Site(s), as applicable] at the time of purchase will apply to the purchase of this product.)