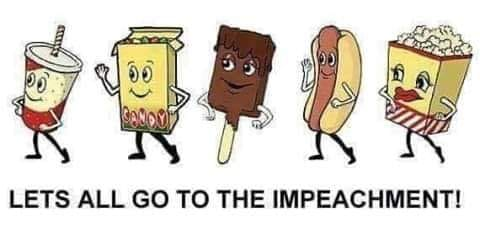 Rep. Peter Welch to Jim Jordan: "I'd be glad to have the person who started it all come in and testify. President Trump is welcome to take a seat right there!" pic.twitter.com/YbCvHKfKeV

The overheard voice of President Trump on the call Ambassador Taylor just described would, in a normal world, count as an exploding bomb, not just a smoking gun. This is no normal world. Our challenge is to make it one.

William Taylor and George Kent showed themselves to be credible witnesses.

There appears to be no factual defense for Trump.

News on the investigative side brings news on the 26 July conversation noted below whose staffer will be deposed on Friday.

The ask was illegal, evidence and witnesses remains held and blocked.

Trump should come and testify.

The GOP arguments become more like obstruction, with no defense of Trump, but remain weak if only for the criminal conduct.

.@RepValDemings: Was Rudy Giuliani promoting US interests in Ukraine?

Demings: What interests was he promoting?

Kent: I believe he was looking to dig up political dirt against a potential rival in the next election cycle.

Testimonies of George Kent & Ambassador Taylor were devastating to @realDonaldTrump. When main response of Rep Nunes is the Steele Dossier & let's out the whistleblower, it's clear @POTUS is in big trouble.

No one is above the law, not even the President.#DefendOurDemocracy https://t.co/nQACiQmBEr

Thanks @LuluLemew for creating this great graphic image!

July 26 phone call where Trump checks in with Sondland on status of Ukraine’s Biden investigation.

This, from William Taylor’s prepared remarks, is new: pic.twitter.com/ZM4P2vknV6

Today the American people will hear from Bill Taylor – the Amb. to Ukraine and a true patriot.

Here's what he's expected to confirm: the President of the United States tried to bribe a foreign government for personal gain. pic.twitter.com/Q5p875Buxp

An Iraq war hawk – @davidcicilline: Just a reminder that the President’s hand-picked national security adviser described his attempts to shake down Ukraine for political help as a “drug deal.” pic.twitter.com/akyLGw7jOe”

My eyes are on November 20: Gordon Sondland in the morning and DOD's Laura Cooper in the afternoon.

What will Sondland say about this July 26 call w/ Trump?

Will Cooper corroborate there was a quid pro quo?

And then watch "Burn After Reading".

The televised Watergate hearings that began in May 1973, chaired by Sen. Samuel Ervin, commanded a large national audience – 71% told Gallup they watched the hearings live. As many as 21% reported watching 10 hours or more of the Ervin proceedings. https://t.co/3adbxfblpx pic.twitter.com/dMNHw7UKP3

(33183)
$348.00 (as of May 21, 2022 09:21 GMT -04:00 - More infoProduct prices and availability are accurate as of the date/time indicated and are subject to change. Any price and availability information displayed on [relevant Amazon Site(s), as applicable] at the time of purchase will apply to the purchase of this product.)