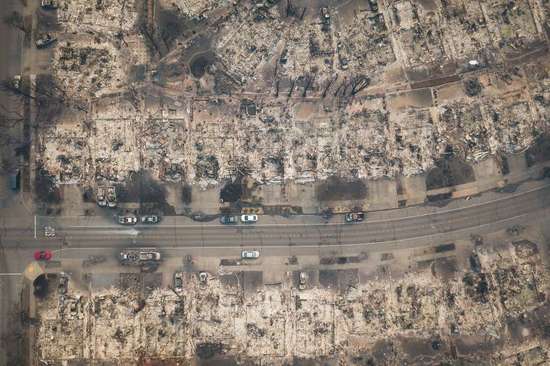 While many are left with nothing, others who still have their homes and possessions face the prospect of a continuing inferno:

Stories, tweets and pictures from the devastation:

“Embers the size of quarters were falling out of the sky,” Held recalled of early Monday morning, when a knock on the door by police prompted him to get out. The police had known about his disability, and assisted him into his wheelchair and car. “It’s kind of scary. If people like myself are in that position, how are they going to get out? I’m lucky I have my own wheels.”

One such story has already emerged. Charles and Sara Rippey, 100 and 98 years old, respectively, were the fire’s first identified victims, after their son found their bodies in the debris of their Napa home on Monday.

Mike Rippey, their other son, said his father may have been heading to his mother’s room when he was overcome by the smoke and flames.

“My father certainly wouldn’t have left her,” he said.

the flames pushed onward Wednesday morning into more communities, prompting thousands of firefighters to scramble to save lives and property in several counties and authorities to evacuate thousands more people from their homes.

UPDATE: Now more than 180 people are missing as CaliforniaÃ¢Â€Â™s firestorm rages on https://t.co/dxOXQmkXmS

Arilyn Edwards, 6, stands beside her bike in front of the rubble of her Santa Rosa home on Tuesday, Oct. 10, 2017. The bike, which was a gift for her 6th birthday on Oct. 6, was destroyed as fire ripped through her neighborhood on Sunday evening.

(51626)
(as of May 21, 2022 04:12 GMT -04:00 - More infoProduct prices and availability are accurate as of the date/time indicated and are subject to change. Any price and availability information displayed on [relevant Amazon Site(s), as applicable] at the time of purchase will apply to the purchase of this product.)