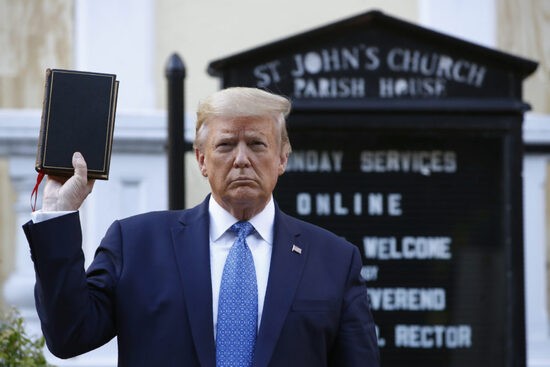 If you thought that the dystopian cult that sprung from Donald Trump's “Make America Great Again” (MAGA) crusade was bad, you aint seen nothin' yet. The messiah worship that is prevalent among the Trumpist wackos is continuing to evolve in the most foreboding fashion imaginable.

Newsweek is reporting on the emergence of an offshoot of the Trump Cult that has been anointed “Dark MAGA.” The article describes this budding Internet trend as…

“A small fringe of Donald Trump's supporters [that] is calling for the former president to get back on the highest stage of U.S. politics with a vengeance with the motto: #DarkMAGA. More of a meme than a political slogan, Dark MAGA is a post-alt-right aesthetic that promotes an authoritarian version of Trump.”

RELATED: Trump Says ‘I Am the Chosen One’ After Tweeting that He’s ‘The Second Coming of God’

One has to wonder how “an authoritarian version of Trump” differs from the version that has been polluting American society for the past several years. Setting aside the obvious similarities, Newsweek goes on to paint a chilling, but accurate portrait of the Dark MAGA minions saying that…

“Dark MAGA supporters are calling for a ruthless, unforgiving version of Trump to take revenge on his political enemies at the 2024 election [and that] Many of the messages posted by Dark MAGA supporters incite violence and contain misogynistic and/or racist comments.”

Once again, how does that make these MAGAts in any way distinguishable from the standard variety of Trumpish pestilence? Is there some obscure Trump sect that is NOT ruthless, unforgiving, vengeful, and hateful? If so, they're doing a darn good job of concealing their existence. And from their secret lair they still manage to promulgate the themes of MAGAism. Which are conspicuously similar to those of QAnon:

“According to [UNC Prof. Alice E.] Marwick, the result of this is a 'heavy victim mentality' among some Trump supporters. 'The general messaging that the Democrats are evil, that children are under threat, that people may need to take extreme acts, even political violence to protect their children and their values, I think is consistent across the (far-right) spectrum,' says Marwick.”

So the question as to the alleged dawning of Dark MAGA is this: Is it really any darker than what produced the January 6th insurrection? The promotion of white nationalism? The loss of 1,000,000+ Americans due to COVID? The treasonous embrace of murderous tyrants like Vladimir Putin? The contempt for the Constitution and the law? The spreading of racism, misogyny, and homophobia? The ceaseless lying? The undermining of democracy? The defiling of faith? The division of the American people? The assault on the free press and the media? And the march toward authoritarianism?

MAGA is already a movement that has sought to sabotage virtually every institution that sustains a free society: government, law, media, arts, academia, science, religion, family, philanthropy, and economics. And the advent of Dark MAGA doesn't alter that one bit. It is simply a new name for an old poison. It is nothing more than the already noxious manifestation of Dark Trump. And the antidote is still the glaring light of truth and a commitment to flushing Trumpism out of the body politic.

(86919)
(as of May 23, 2022 13:49 GMT -04:00 - More infoProduct prices and availability are accurate as of the date/time indicated and are subject to change. Any price and availability information displayed on [relevant Amazon Site(s), as applicable] at the time of purchase will apply to the purchase of this product.)