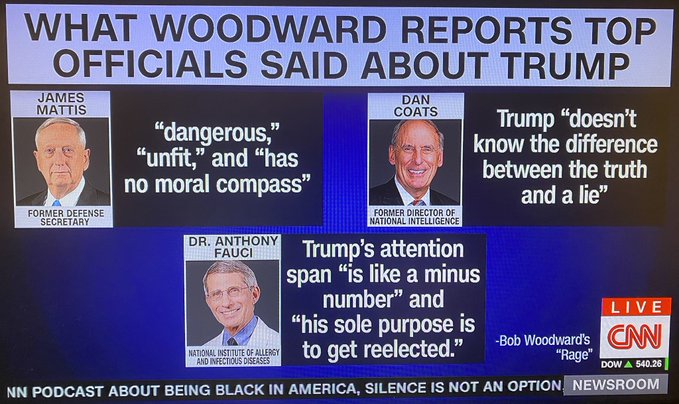 Trump’s flailing and the lies just keep on coming.

Trump knew the coronavirus was deadly. He knew it was not a hoax. And he knew it was worse than the flu. But he lied to the American people so he could “play it down” and make himself look better.

Now he’s been caught on tape admitting his lies.pic.twitter.com/a7hR3COXYd

They should be more upset that so many died needlessly than that Trump told the truth to Woodward. https://t.co/gbBilgIHQV

Remember above all else, Trump didn't want to spook the markets as the economy was his ticket to reelection. So when you hear him talking about keeping calm and no panic, he's not referring to our lives, he just meant his.

The U.S. government on Monday will stop conducting enhanced screening of passengers on inbound international flights for COVID-19, Yahoo News has learned.

The screening operations have been held at select airports since January, when the first cases of the disease began to emerge from Wuhan, China. Since March, incoming international flights from select high-risk countries, including much of Europe, China and Iran, among other regions, have been funneled through 15 designated airports in the United States.

Surely, coronavirus outbreaks surging out of control on college campuses was literally the most predictable crisis ever. https://t.co/OevP3niNru

This is Trump's verbatim explanation for what would happen to the Supreme Court if he loses.

In order to avoid complaints that I'm conveying this without qualification: it is ridiculous both broadly and specifically. pic.twitter.com/70BBhTRe8N

Why did you bring up Booker before Biden was the nominee? pic.twitter.com/LdSiq1yaP2

DHS leadership downplayed threats of white supremacy and Russian interference to hype up fears around immigrants, anti-fascists, and China, a whistleblower complaint from a former top DHS staffer alleges: https://t.co/7WwsXb8Q7p

Please retweet this right away to expose Trump. He is pretending that tapes of his own words are a 'hoax' and fake news. #PretendPresident pic.twitter.com/5ceM6LKjfm