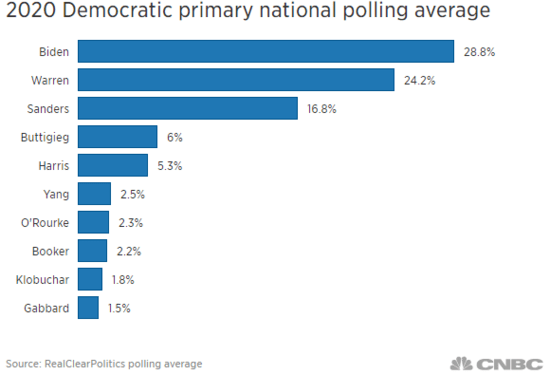 Actually, there isn’t just one Media narrative on the Democratic presidential race, but I want to focus on this one story from CNBC.  It certainly encapsulates the narrative on Joe Biden.  Yes, I do not support Joe Biden, BUT I do not think that the data presented supports the narrative.  Spoiler Alert:  Biden’s campaign is faltering.  I think that the jury is still out on that verdict, but try telling that to the Media.

Yes, I know.  It’s CNBC, but they do use polling data from Real Clear Politics.

First up, Biden is still the official front runner using an average of national polls:

Sorry it is small, but it appears that the current average is Biden at 28.8%.  And to be honest, this is about where Biden has been polling for the last several months.  As 538 points out, Warren’s growth to 24.2% in a national average is not really taken from Biden.  Instead, it has come from Harris.

What about the other candidates?  One of the other Media narratives is that the last debate shook things up because Buttigieg and Klobuchar won.  I don’t agree with that assessment because neither Buttigieg’s or Klobuchar’s national numbers have moved.  If you don’t believe me, go look at RCP graph.   And it has been a week, so something should have changed if both of them won the debate.  Remember how Harris went up after one of the debates?  Harris doubled her national support after one debate.

But we do not have a national Democratic primary.  We have state primaries, so how are the candidates doing in the early contests?  Let’s look at Iowa.

This is an average from RCP, or so CNBC says.  Essentially, Biden and Warren are tied, and not far behind is Buttigieg and Sanders (tied).  And it certainly appears that Buttigieg is in contention in Iowa, and I agree.  This result from Iowa doesn’t look good for Biden.  It appears that three other candidates are giving Biden a run for his money in Iowa.

My only nit picking is with any Media spin that Buttigieg moved up because of his latest debate performance.  As I pointed out earlier, Buttigieg has been spending heavily in Iowa.  In fact, he is outspending Sanders and Biden.  The only person who is matching him with resources is Warren.

Oh, and that Klobuchar rising narrative, where is it in Iowa?  I don’t see it, at least not in this average of the polls.

What about New Hampshire?

Warren has a small lead over Biden.  Sanders is in third place with Buttigieg a more distant fourth.

This is another data point that shows that Biden’s campaign has a weakness in NH.  This should be a better environment for Sanders, but he is in third for now.  Buttigieg is investing in NH, not to the same level as in Iowa though.  And, no, I still don’t see a Klobuchar boomlet in NH, and Klobuchar is betting the farm in Iowa and NH.

As for Nevada, Biden has a small lead of about 4 points about Warren and 4.5 ahead of Sanders.  Buttigieg is a distant fifth.  Klobuchar is at 0.5%.

And here is where Joe Biden has his greatest strength:  South Carolina.

People talk about all the moderate black voters in SC, and it is this moderation that Biden speaks to.  It is a factor, but we all know that an even bigger factor is that Biden was Obama’s VP.  And the most enthusiastic supporters of Obama are black voters.

All the other candidates have a lot of work to do to find any traction with SC Democratic voters.  Because of this, SC is known as Biden’s firewall.  And while Sanders and Warren need to expand their support into the black community, I see a real problem for Buttigieg and Klobuchar.  Both of them have vested in Iowa and NH, but I didn’t see a lot of their infrastructure in SC.  If Buttigieg and Klobuchar ignore black Democratic voters, they will end up on the short end of a stick.

To recap, Biden has stiff competition in three out of the four first contests.  And unless something else pops up on the horizon, Biden is still in this contest.  However, does he have the money for the campaign infrastructure that he needs?  Shrugs.  This is where the candidates have to go out and meet the voters and get some really efficient GOTV machines in place.  If Biden suffers a lose or multiple loses, we could see his support plummet.  But this is true of any of the candidates.