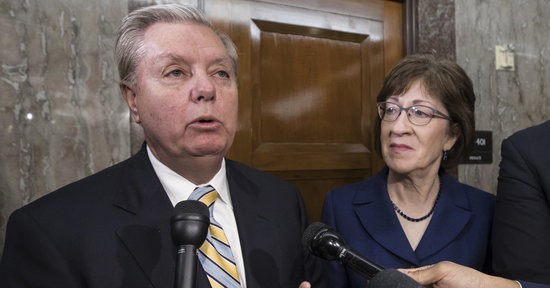 There’s much to hate about Lindsey Graham and the submissive puppet to Donald Trump that he has become since McCain’s death. Yet at the very least, he is honest about the kind of person he’s become. He no longer pretends to be a moderate or a “principled” conservative.

Susan Collins is a rightwing hack who masquerades as a “moderate” in order to keep her job in a blue state. Sure, she may vote against the worst impulses of her party—usually during an election year—but here’s the key: only if her vote won’t make the difference.

Harry Reid put it best on Susan Collins: “She’s always there when you don’t need her vote.” Despite having numerous opportunities, Collins always passes at being the deciding vote against her party, no matter what. It’s this grift that makes Trump blush, and it’s why the hardliners love how she plays her constituents for fools.

The most recent example was just this past Thursday, at the Senate Appropriations Committee meeting. Collins has repeatedly and forcefully claimed that she is opposed to Trump stealing money from our military community to build a wall that Mexico was supposed to pay for.

Just one day before her vote, the Bangor Daily News touted her supposed dedication to stopping Trump’s power grab with the headline: “Susan Collins joins another effort to stop Trump’ border emergency declaration.” The glowing article quoted her fiercely stating that she defended the “system of checks and balances that is central to the structure of our government”.

Yet the very next day, an amendment authored by Sen. Patrick Leahy (D-VT) was proposed to do just that: stop  Donald Trump from raiding funds from the military and military families to pay for Trump’s wall.

It fell one vote short. Susan Collins instantly fell in line when she realized that she’d be the deciding factor, and voted it down.

“Unfortunately, this is another instance of Senator Collins telling Mainers one thing and then doing another in Washington,” Kathleen Marra, Maine Democratic Party chair, said in a statement.

(33018)
$348.00 (as of May 19, 2022 08:09 GMT -04:00 - More infoProduct prices and availability are accurate as of the date/time indicated and are subject to change. Any price and availability information displayed on [relevant Amazon Site(s), as applicable] at the time of purchase will apply to the purchase of this product.)