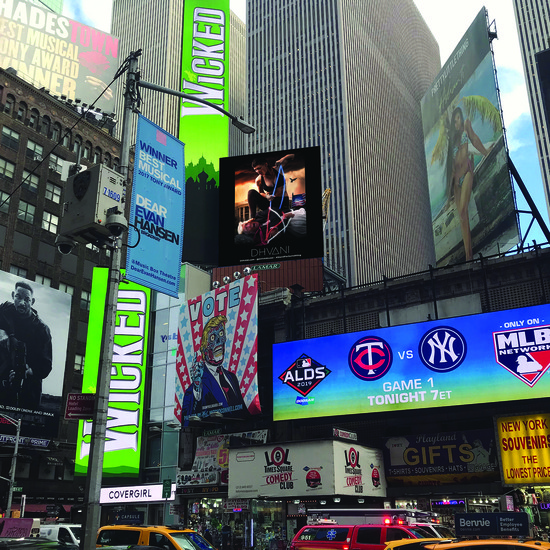 Portland based clothiers Dhvani has prominently positioned an ad in Times Square depicting what they say is a marine veteran hog tying drumpf on the lawn of the White House, protesting the admin’s blocking of Federal Funding for Planned Parenthood, and, typically, Don Jr. has responded by comparing it to the video showing a mock up of his father gunning down journalists and politicians.

“A riveting clothing advertisement on a Times Square billboard depicts a female Marine veteran in athletic wear hogtying a man who appears to be President Donald Trump in front of the White House.
The ad has already been slammed in a tweet by Donald Trump Jr., who called reporters “hypocrites” on Thursday for failing to criticize it.

The 30-foot-high ad features a Trump look-alike being trussed up with red, white and blue rope as the vet steps on his face. The ad was unveiled in Manhattan last week by Portland-based clothing company Dhvani.

Dhvani called the ad “metaphorical,” adding on Twitter that it “does NOT and will NEVER condone violence of ANY KIND.” It’s intended to “artistically express the frustrations we believe many women share,” the statement added.
Specifically, it’s an attack on the Trump administration’s blocking federal funds to Planned Parenthood health providers who refer patients for abortions, Dhvani CEO and founder Avi Brown told The Associated Press.
“We are on the right side of history,” Brown declared. “The billboard is an expression of our First Amendment right. Its art is a symbol … This is about taking our country back.”

Here is a pic of the ad in its natural habitat above Zombie Trump:

Hey @NYTimes and MSM. Since you had time to thoroughly cover a stupid and tasteless meme seen by 8 people with incredible outrage, I figured you should dedicate the same time and outrage to THIS BILLBOARD IN TIMES SQUARE you hypocrites!
Unless of course you’re just full of shit. pic.twitter.com/fsEF6ClRuv

Uh, di**head Jr., an ad depicting a little light bondage and well placed foot is in no way analogous to a a video showing a mocked up POTUS shooting people in the face.

Even someone as stupid as you should know that.

Besides if Stormy Daniels is to be believed, you dad enjoys a little spank every now and then.

This should be right up his alley…

(28)
$19.99 (as of May 18, 2022 05:23 GMT -04:00 - More infoProduct prices and availability are accurate as of the date/time indicated and are subject to change. Any price and availability information displayed on [relevant Amazon Site(s), as applicable] at the time of purchase will apply to the purchase of this product.)