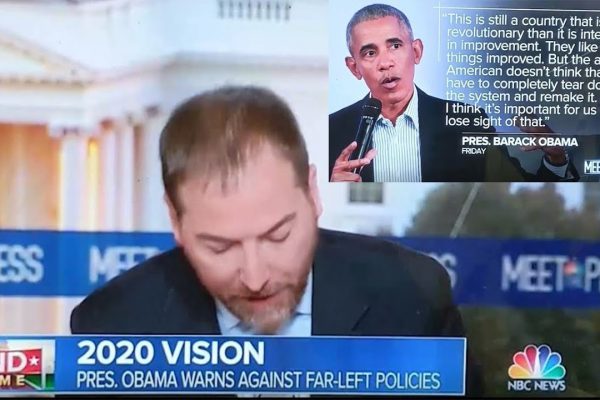 It was clear what would happen when President Obama attacked progressives, a philosophy he followed at one time. Chuck Todd and company picked it up and ran with it.

As I previously blogged, President Obama was meeting with wealthy liberal donors where he said the following. This is how Vox wrote it up.

Former President Barack Obama has studiously avoided commenting on the Democratic presidential primary, but on Friday, before a crowd of wealthy liberal donors in Washington, he finally weighed in. His message? Don’t move too far to the left.

“This is still a country that is less revolutionary than it is interested in improvement,” he said at the annual meeting of the Democracy Alliance. “The average American doesn’t think we have to completely tear down the system and remake it.”

Obama’s remarks come at a time when the primary’s central dynamic is a clash over whether the best way forward is for the party is to continue along a center-left path, most prominently represented by former Vice President Joe Biden and South Bend, Indiana, Mayor Pete Buttigieg or to chart a more left-wing course, as Sens. Elizabeth Warren and Bernie Sanders have argued.

In what seemed a rebuke of Warren and Sanders’ stances, Obama, who is still held in exceptionally high regard by Democratic voters, spent considerable time during his speech counseling against adopting left-wing populism as a party platform.

President Obama knew exactly what he was doing. He had properly stayed out of the fray. But it is clear the Plutocracy needed a favor as the progressive break-out was taking hold. Let’s be clear, President Obama used to be a Progressive who wanted change for the masses, for those who needed it most. One must start questioning whether the rare air at the top has one forgetting the disposed and those most in need he once cared about as a community organizer. His constant support of a mythical middle that is but slightly left of Reagan means 80% of Americans will remain $400 away from disaster if the Democratic Party adopts the Centrist theology corporate plutocratic peer pressure seems to be exerting on him.

One hates to call out the man many of us supported through thick and thin. We gave him a pass for the unfair tribulation he had to endure. He no longer has that. He owes Americans the truth even if it is disruptive to the Plutocracy and he knows what it is.