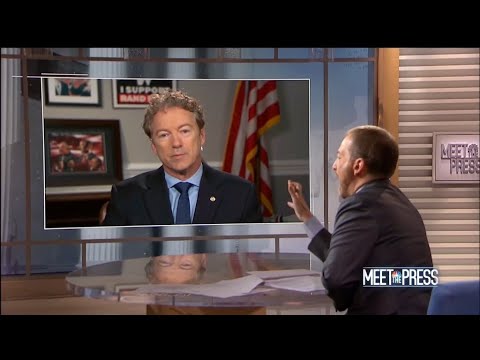 Rand Paul took such command of the interview with Chuck Todd that Congressman Jim Himes (D-CT) had to scold Todd after saying he needed to “de-combust” his head after listening.

Chuck Todd‘s interview with Rand Paul was an embarrassment not only for Todd but for the corporate mainstream media. It is clear that the tepidity with which they deal with Republicans and neo-liberals is a detriment to truthful, accurate, in-depth, and meaningful coverage Americans can depend on which allows them to make objective decisions and choices.

It is clear that Chuck Todd was either willfully or maybe purposely ignorant or out of his league with the multifaceted narrative that the GOP will use successfully with enough of the American populace. Why? Because we have a media ready to acquiesce to whataboutism, chumminess with the characters, and timidity.

The interview with Rand Paul, as usual, was drawn out by his effective wordiness to kill time and constantly keep Chuck Todd off keel. Below is the excerpt with the important parts along with Jim Himes‘ respectful scolding of Todd.

Rand Paul was allowed to posit four deflective narratives by giving him too much time to bloviate.

We should not be giving aid to Ukraine anyway because we are borrowing money from China to do so.

Where was that GOP argument when they were giving away our treasure to the rich with Trump’s tax cut scam where he told his wealthy friends they will get richer after the tax cuts. Remember he also told us the tax cuts went mostly to the middle-class.

Joe Biden attempted to get a prosecutor removed before Congressionally approved military aid would be released to Ukraine.

This is a false equivalence Chuck Todd just left in the ethos as “does two wrongs make a right.” USA Today explains what Todd could have rebutted in 5 seconds.

It wasn’t because Shokin was investigating a natural gas company tied to Biden’s son; it was because Shokin wasn’t pursuing corruption among the country’s politicians, according to a Ukrainian official and four former American officials who specialized in Ukraine and Europe.

Shokin’s inaction prompted international calls for his ouster and ultimately resulted in his removal by Ukraine’s parliament.

Hillary Clinton did the same thing as she had a British national assist her in digging up dirt on Trump.

Suffice it to say that Clinton was a private citizen doing oppositional research and did not work with another government. Moreover, Clinton and the DNC just took over the payments from a Republican donor who started the research. It is amazing the incestuousness of the two establishments.

President Obama did not give Ukraine the military aid Congress approved but instead sent blankets.

This was summarily debunked by in this CNN fact check.

Facts First: Trump is being hyperbolic here. While the Obama administration was criticized for its refusal to provide lethal assistance to Ukraine, it did provide more than $100 million in security assistance, as well as a significant amount of defense and military equipment.

By March 2015, the US had committed more than $120 million in security assistance for Ukraine and had pledged an additional $75 million worth of equipment including UAVs, counter-mortar radars, night vision devices and medical supplies, according to the Pentagon’s Defense Security Cooperation Agency.

Progressive activists have got to keep their eyes on the ball and not put too many eggs in the impeachment basket. Americans need to know we work in parallel but mostly for policies they need.

(51660)
$17.62 (as of May 21, 2022 22:07 GMT -04:00 - More infoProduct prices and availability are accurate as of the date/time indicated and are subject to change. Any price and availability information displayed on [relevant Amazon Site(s), as applicable] at the time of purchase will apply to the purchase of this product.)