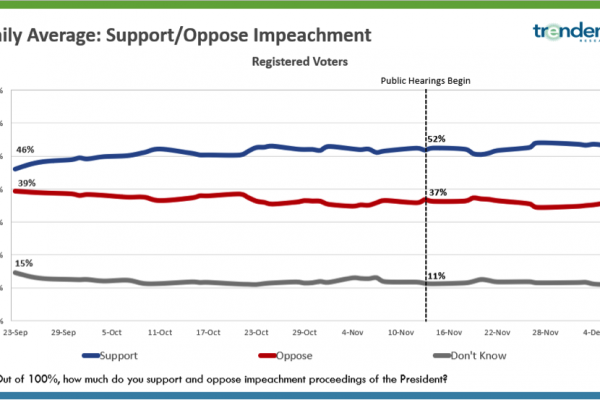 As we discussed in our previous post, Trendency has been tracking the opinions of registered voters on the impeachment of President Donald Trump since the beginning of the year.

Through most of 2019, even during the height of the Mueller Report becoming public, the public did not favor the impeachment of the President. This dynamic changed dramatically following the public awareness of a whistleblower complaint and Speaker Nancy Pelosi announcing an impeachment inquiry.

Over the following month and a half before the start of the public hearings, average support for impeachment steadily grew from 46% to 52%. And the concentration of the American public who strongly supported impeachment increased from 36% to 44%.

The increase in support was not a straight line from September 23rd to November 12th but the pattern was still clear. The public hearings were clearly a new phase of the inquiry and showed a new pattern in how voters were reacting to events. Reporting on public polls has generally pointed to the conclusion that there was no movement during the hearings and NPR went as far as to state that “it was like the hearings didn’t even happen”. Unfortunately, this is an overly simplistic view of the data. This view is similar to us saying that it was 50 degrees on October 26th and it was 50 degrees on November 10th, so therefore there was no change in the temperature. The numbers news outlets are using to make this case are present, but it ignores the fact that Americans were paying attention, their views were shifting, and we can see why.

There was a lot happening in a relatively short period during the public hearings and there were some fascinating movements in the data which lined up with specific witnesses.

As shown in the chart above, over the first week and half of public testimony there was little to no impact on public opinion. In fact, support dipped after the first week and there was a reciprocal growth in opposition (this is not always the case). Republican messaging that this was much ado about nothing seemed to be working and, as has often been the case, support tends to dip over the weekends and grow during the week.

This changes dramatically on Nov 20th and 21st when we see a jump in support. This may seem like a small jump (49 percent to 54 percent), but, given the short period of time and what is happening during the hearings, this is a noteworthy shift. This is when European Union Ambassador Gordon Sondland testified (changing his testimony from his previous closed-door session), providing more details on direct conversations with the President and exchanges with other officials. Unlike the previous public testimony this provided new evidence. The previous witnesses, while giving information in person and in public, were not presenting new information.

The following day, former Deputy National Security Advisor Fiona Hill testified on her experiences, including a strong push back on the theory of Ukraine election interfaces in 2016 as Russian propaganda. Joining Hill on Nov 21st is a career national security professional, David Holmes, who testifies to overhearing a conversation between President Trump and Ambassador Sondland.

The Sondland and Hill public hearings change the trajectory of public opinion, raising support to its highest levels since the beginning of the inquiry.

As we highlighted in our look at the initial phase of the inquiry, college-educated white men have been a key demographic to watch because they hold the most changing and least partisan views. In the chart below we see a similar trend among this cohort as with registered voters, but far more dramatic. During the public testimony pre-Sondland and Hill, support among college-educated white men fell to 49%. After these two testify, support starts moving in a more positive direction and continues to grow up to the start of the Thanksgiving holiday where it levels off at 55%.

These two cohorts show very clearly that looking at the beginning and end points limits your ability to understand what was really happening. Yes, college-educated white men started and ended at 56 percent support, but the journey was not a straight line. Similarly, the beginning and end points from non-college-educated white men would argue for a two point increase in opposition which, while true, overlooks how this cohort is reacting to news events, and how discussions after these events are effecting people differently.

In the new year we will be looking at how opinion changed during the vote in the House, as well as tracking shifts during the Senate trial. In the meantime we hope everyone has a great end to 2019. Happy Holidays.

(28)
(as of May 18, 2022 10:23 GMT -04:00 - More infoProduct prices and availability are accurate as of the date/time indicated and are subject to change. Any price and availability information displayed on [relevant Amazon Site(s), as applicable] at the time of purchase will apply to the purchase of this product.)